Home Sport 'Then only one thing goes through your mind'
Sport

‘Then only one thing goes through your mind’ 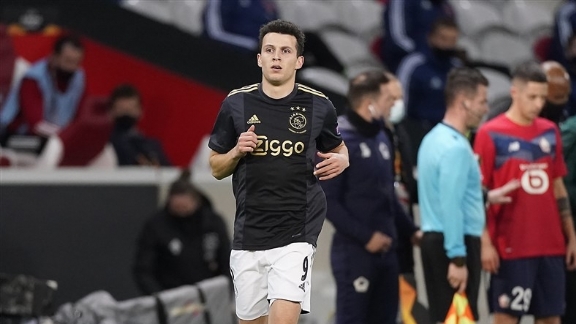 In addition to the 1-2 victory over Lille OSC, there was something else to celebrate for Oussama Idrissi on Thursday evening. Article link https://www.news1.news/news/2021/02/then-only-one-thing-goes-through-your-mind.html

The winger made his debut for Ajax after coming over from Seville this winter. Idrissi was brought in for Antony in the Europa League game by trainer Erik ten Hag nine minutes before time. At that moment, Ajax faced a 1-0 deficit, which was reversed not much later by Dusan Tadic and Brian Brobbey. Thanks to the victory, Ajax can look forward to Thursday’s return with great confidence.

It was the second time for Idrissi that he was on the bench at Ajax, after he stayed ninety minutes in the home match against PSV (2-1 win). “I was ready to help the team if necessary,” said the attacker Ajax TV back on his debut. “When you come in as an attacker at a 1-0 deficit, only one thing goes through your mind: do everything you can to win. We succeeded and that is a good performance for the team. It feels good that I was able to be part of that. It makes me hungry for more. ”

The seven-time Moroccan international has always kept hope for a good result against Lille, despite the fact that Ten Hag’s team was behind twenty minutes before time. “We analyzed the game and teammates also concluded that we were unnecessarily behind,” says Idrissi. “Nevertheless, we continued to do our thing and dominated the game. We knew in advance that we would have a good chance. With all due respect to Lille, because they just do very well in France. We have a very good starting position to finish it in-house next Thursday. ”

Ajax’s good play even led to Ten Hag’s team being labeled a favorite by a few to win the Europa League. “You are always a potential winner if you play well in such a competition. All ingredients are there to go far and that’s what we go for. But we also know that every opponent is different. We are dealing with a number of good opponents. ” Last season Ajax stranded in the sixteenth finals, when the team from Amsterdam had to bow over two duels for Getafe.

Idrissi has now found his niche at Ajax and can get along very well with two players from the selection. “I have contact with a lot of guys,” admits the right leg. “But in the end you hang out the most with the guys you sit at the table with. Those are Zakaria Labyad and Noussair Mazraoui. ” Idrissi hopes to be of value again next Sunday, when Ajax is visited by Sparta Rotterdam in its own Johan Cruijff ArenA. “I can’t wait to show more of myself.”

Did you like Oussama Idrissi taking his place against Lille OSC?