Hapoel Beer Sheva understands that bringing in a senior coach like Roni Levy, as well as the addition of Hatem ‘Abd al-Hamid and Farley Rusa, is only the first swallow in Alona Barkat’s desire to bring the Reds back from the Negev to the not-so-distant days when they competed for all the titles.

The owner has patience and she also decided to increase the budget, assuming that the club will play next season as part of the Conference League. For that to happen, BS, which has won only one of its last six games in all competitions, will have to beat Betar Jerusalem at Turner Stadium, in the new coach’s first game on the lines, specifically against the ex from which he was fired.

Barkat does not intend to stop in the purchasing trend. Dor Micha concluded in principle and will sign for three years soon. Next on the club’s wish list is the excellent Ashdod stopper, Nenad Svetkovich, whom Jackie Ben Zaken will not be in a hurry to give up, as well as Matan Balteksa and Itai Schechter from Maccabi Tel Aviv who will become free agents in the summer. BS has already expressed interest in both of them in the last transfer window, even during the period when Yossi Aboksis coached the team. 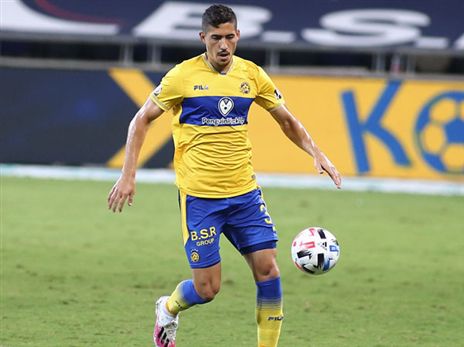 Balteksa, will become free in the summer (Alan Schieber)

The more than 1,000 fans who came to the stadium the day before the cup game against the champion and accompanied the players with songs, drums, flares and explosives made the landlady very happy, who understands how much the fans who support her are very thirsty to return to compete for titles.

Back to Roni Levy – Although there was a game on Tuesday, the pace in the new coach’s first training was high and players who did not play wanted to prove to Levy that he should believe in them. Although Anthony Varen was not Levy’s favorite in Betar, the coach opened a clean sheet with everyone and the striker will also get opportunities to prove. In any case, the player ends a contract in the summer.

Those who are not expected to continue are Sean Goldberg, Marcelo Mali and Jonathan Agudello, and a question mark now also exists in the case of Cintio Sallich in light of the bringing of Micha and the expected return of Ramzi Spori from the question. In another matter, Mariano Briero is considering undergoing shoulder surgery, while his thumb will not return soon due to a muscle strain. Ahead of Betar, Levy will get back Joshua and David Keltins, who will return from a distance. Eitan Ratzon, who felt sensitivity in the muscle, also joined the wounded yesterday. Netanyahu on restrictions on Purim: “I will propose to the government to impose a night curfew on Thursday, Friday and Saturday from 20:30 to...

Prime Minister Benjamin Netanyahu visited the vaccination complex in Acre today (Tuesday), and said that the government will vote tonight on the imposition of...
Read more
Breaking News

Purim 2021: When will the night curfew begin?

The economic corona: a negative monthly record in the number of people returning to work since the beginning of the crisis

Article link The third closure took a heavy toll on the labor market, according to data released this afternoon (Tuesday) by the...
Read more
Breaking News

The “corona denies” doctor’s license has been revoked

Article link The AEX dips 2.2% at around four o'clock to 656.7 points after having previously partially reduced the damage. Article...
Read more
Breaking News

Dr. Aryeh Avni’s doctor’s license was revoked, calling for no vaccination against Corona