Home Lifestyle "It's a pity that this is how girls are presented": surfers are...
Lifestyle

“It’s a pity that this is how girls are presented”: surfers are angry about Bezeq’s advertisement

Bezeq’s new Internet advertisement tried to connect to positive vibes and transmit joy and bouncy energies, but as the network’s way, something in the signals along the way went a little wrong and the surfers – angry.

In the new campaign that came up last week, Ella Lee Lahav stars alongside the company’s veteran presenter Gidi Gov (who has already connected with the Millennials in previous commercials when he joined Noa Kirl, Agam Bohbot and Omar Adam), while together with other network influencers they try to convey the message about networking Strong internet to suit work from home.

But for many surfers, the message of “girls must now have wifi” along with the choice of young network influencers and the general gender message, which supposedly presents a narrow and empty world of young female culture whose main occupation is makeup, cooking and likes, has provoked quite a few angry reactions.

“A completely shallow and stereotypical advertisement,” raged a surfer on the company’s official Facebook page, “instead of giving an example and showing young girls what they can do with their enormous potential, you show them that all they care about is clothes, makeup and cooking. An advertisement suitable for 1950 and not 2021 “It seems that you did not put any thought into this commercial and also that there were no women in writing the script and the production. Shame.”

“Bezeq, you made me not miss the eighties anymore. Article link https://www.news1.news/news/2021/02/its-a-pity-that-this-is-how-girls-are-presented-surfers-are-angry-about-bezeqs-advertisement.html

The commercial is shocking, the lyrics do not flow with the beautiful music and you ruined Cindy Laufer’s song. I just imagine your copywriters at the working meeting who decided on this horrible commercial just a blatant lack of professionalism and lack of market understanding,” he added. Another surfer and many others reinforced: “You were disappointed. Instead of presenting women who are interested in science, sports, technology, you present them as superficial that all they care about is appearance and social networks. Shame on you,” and “How did such a delusional advertisement pass your decision makers? “Is that really what women work for? In tic-tac-toe, in putting on make-up and cooking, is that what girls want? Just unbelievable. Just insolence.”

Although it garnered more than half a million views on the company’s official YouTube page, even there the surfers spared no criticism of the commercial video and rushed to fill the page with angry comments. “Obviously all I do in life is Instagram and Tiktok. I don’t really have a personality like all the girls,” a surfer wrote.

“What made me laugh was that at first she said such a stupid sentence ‘I work a lot at Tiktuk.’ Wow, hard work, well done for the effort,” another surfer cynically wrote, and another added: “I am thirteen and can tell you that Tiktok and Instagram are Article link https://www.news1.news/news/2021/02/its-a-pity-that-this-is-how-girls-are-presented-surfers-are-angry-about-bezeqs-advertisement.html

The last thing that interests me is that it’s a shame that this is how girls are presented. “For every shekel and they work on Instagram … it’s sad that this is what they think of us, there are smart teenagers who are not interested in social networks at all and in this whole world,” she concluded. 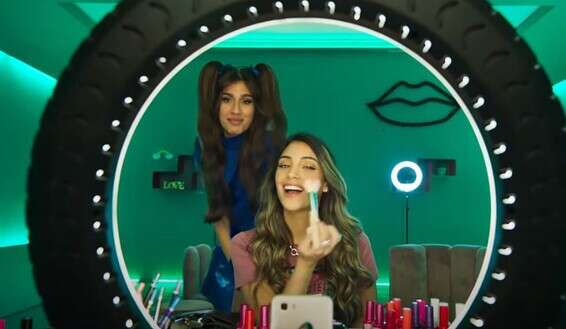 “I am amazed time and time again at how the treatment of youth in the media is disrespectful and sometimes manipulative,” commented another surfer. “Like: I’m sure most of us are not like pigs, network addicts or even anti-social as we are portrayed in the media and in the media: the one who targets youth and the one who talks about youth. As boys and girls watching this, we just have to put a red line Far beyond commercials. “

Flash delivered in response: “In the last few days we’ve put on a TV campaign to get a message out of empowering women who pursue careers online. In the humorous commercial we chose to paraphrase Cindy’s well-known hit Girls just wanna ‘have fun’.

The lyrics of the original song were adapted to the spirit of the time and took on a new meaning when the phrase ‘girls just want to have fun’ became ‘girls must now pay’ as a tribute to the independent young women who today pursue successful careers on platforms like Tiktok and Instagram.

The four young presenters who star in the clip alongside Gidi Gov were chosen because they are strong women known for their tremendous success on social media. But leading bloggers in their field who have leveraged their business through the internet. “

Master con artist Anna Delvey led jet-set life for years: who is she?

In reality, Delvey had nothing to do with her and she comes from an ordinary Russian working family that has lived in Germany for...
Read more
Lifestyle

Just before Meghan and Harry’s Oprah interview, the Que …

Article link The State Department confirms to it AD that the Rotterdam Ravenberg, a 33-year-old girlfriend from Amsterdam and a 26-year-old Dutch...
Read more
Lifestyle

Lawyers Bart De Pauw will not appeal: envelope from VR …

Since Bart De Pauw does not appeal against the decision, it can be determined the day after tomorrow when the...
Read more