Dor Peretz, Score: 7
A clever and quiet play by the midfielder, who once again proved how helpful he is to the Yellows from second line with a winning goal 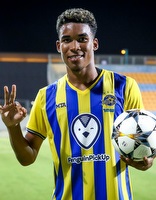 Eduardo Guerrero, Score: 4
Went in to make a change and failed to make an impact in the minutes he was given

Although it ended with only one goal, we had a multiple battle in the events tonight (Sunday) at Toto Turner Stadium, when Maccabi Tel Aviv hosted Hapoel Beer Sheva in the eighth round of the State Cup and won 0: 1. In fact the state champion kept the double dream alive when she tossed the current holder, who will likely end the season without a title.

The group from the capital of the Negev came to this confrontation after receiving the new coach, Roni Levy. Article link https://www.news1.news/news/2021/02/1-to-maccabi-tel-aviv-on-hapoel-bshlosha.html

The latter was not yet on the lines as he had only one training session with the team, but watched his new trainees from the stands.

Reactions of Hapoel B’Shlosha after being relegated from the cup

The game itself opened with yellow-blue control, with Ayalon Almog and Enrique Seborit coming close to giving the visitors an early lead, but encountering a good ability from Ohad Levita. Towards the end of the half, Marino Briero, who phenomenally saved a goal from Eyal Golsa with a heroic save from the line, dislocated his shoulder and was replaced with the opening of the second half by Hatem Abdelhamid (who made his new debut at Alona Barkat’s club). In addition, Shahar Phiben also vacated his place in the opening of the second half after being injured by a tackle by Dudi Twito.

In the 63rd minute Patrick van Leven made a triple substitution and two minutes later he saw his team take the lead, thanks to an excellent kick from Dor Peretz. By the end, the Reds could have achieved the prestigious equalizer, but Sagiv Yehezkel recorded a number of big misses and as a result the hosts parted ways with the title.

After the 2-0 loss on Thursday against Shakhtar Donetsk in the last 32 of the Europa League, the Yellows can go out in a quieter head to Ukraine ahead of the rematch with the ticket to the quarter-finals. On the other hand, Roni Levy and his trainees will have to quickly forget about the cup and concentrate on the league, with Betar Jerusalem waiting for them for a spicy meeting for the coach in the coming round.