The path of the Simplifications decree, expected in cabinet by the end of the week, it already finds a first obstacle. After the publication of the first draft of the text, the premier Giuseppe Conte convened for today at 18 i Heads of Delegation of the majority forces. The decree and therefore also article 10 will be discussed: it provides that building abuse who have not led to an increase in the urban load are punished only with one sanction administrative and that the violation is prescribed in ten years. In addition there is the proposal, still under discussion, to allow the assessment of compliance even for buildings that they were not compliant on the regulatory plan at the time of implementation: a similar regulation of the Sicily Region was rejected by the Consulta in 2017.

On the norm, the first divisions emerge even within the same government: “The amnesties are not eligible, are the result of an old policy and do not solve problems, indeed they cause more. I will never say yes to a amnesty “, is the comment released to The print from environment Minister pentastellato, Sergio Costa. In the dicastery the no to the norm is bipartisan, as the words of the undersecretary and deputy Pd demonstrate Roberto Morassut: “It’s time for Green New Deal, not of amnesties. In the connected environment there will be concrete measures to stop the soil consumption“.

Simplification decree, the reform of the abuse of office and that (on time) of the tax damage: it will be more risky “not to do” than to “do wrong”

In fact, according to Morassut it is “a norm”kill the ground“” Which is “in total contrast to this government’s stated goal of limiting land use and pursuing the zero balance goal by 2050“. “In the discussion on the first draft of the revival decree – reads the note of the undersecretary – I had already raised the problem of the rule on ‘amnesty’ surreptitious. The norm was fortunately shelved but now yes reoccur in the simplification decree “.

“With that rule – continues Morassut – it will be possible extend (in fact without limit) the implementation plans up to and including illegal properties making re-enter in urban planning. And this will result not only in a de facto building amnesty but in the transformation of new agricultural land or inedited in potentially building land. I’d like to report the inappropriateness and the serious contradiction of a similar measure, very insidious. I think it should be removed”, Writes the Democratic deputy. 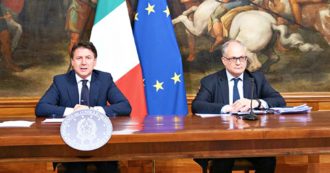 Simplification Decree, “tenders up to € 5 million without tender and accelerated procedures for works of national importance”

The text of article 10 was criticized yesterday by Leu, according to which it has all the air of yet another amnesty“. For the Green coordinator Angelo Bonelli “it’s a clever and scandalous norm“. For the most part, for now few have exposed themselves but certainly no satisfaction has arrived. And in the meantime the criticisms of the labor unions: Cigl, Cisl and Uil ask for a confrontation at Palazzo Chigi.

Libya, Italy and France committed to stability “without foreign interference”

Her best friend invites her to spend the evening together, she refuses and is raped and killed

Sismabonus, for the deduction the company must own the property

How to understand if it is time to buy or sell on the stock exchange? The example of today’s session

The latest negotiation with the Benettons

London, Banksy disguises himself as a sanitizer and takes the “rats” to the subway

who is the new boyfriend

Covid, the new dpcm of July 14th. Beaches and masks: all measures – Chronicle

“Why are you so sad?”. She replies like this

Elisabetta Canalis, bikini too tight or exaggerated Side A? The décolleté explodes, dizzying photos – Libero Quotidiano

Coronavirus, the point on the spread of the infection

a new case in Trieste and one in Monfalcone

PES 2021 appears in the Australian rating as ‘Seasonal DLC’ of...

In Lombardy three quarters of the new cases. And Covid would...

The two reports that warned Trump: “The Russians pay the Taliban...

Car crash, young father dies: the torment of a country –...