MEPs from the League and of Brothers of Italy they voted versus a resolution of the European Parliament that strongly condemns “The atrocious death” of George Floyd and all forms of racism, hatred and violence, as well as stating that ‘Black Lives Matter’. In favor of the resolution, the MEPs of the Pd, of the M5S, of Come on Italy and of Italia Viva.

League sources speak of “numerous perplexity on the motion for a resolution, which presents many utopian goals and which represents “to them called” a distorted reality “. They also criticize an alleged comparison between the situation of the US and that in the EU and “do not share the position and the exploitations to attack indiscriminately i law enforcement representatives, the US president and political forces they express critical opinions regarding the management of migration phenomena“.

The resolution was adopted with 493 votes in favor, 104 against and 67 abstentions. MEPs urge the US government and authorities to take determined measures to deal with racism and inequalities Structural. They also condemn the repression by the US police peaceful demonstrators and journalists and deplore the threat from the president Trump to deploy the army, as well as its “incendiary rhetoric“. 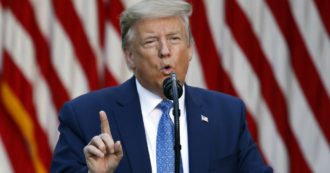 Usa, Trump: “The tightening of the neck will be prohibited”. Executive order on police signed after street protests: “No cuts, we improve standards”. And he sees the families of the victims: “We cry at your side”

The EP affirms that racism and discrimination are not allowed in our societies and asks the EU to adopt a strong and decisive position. The text reads that it is necessary to put an end to any form of racial or ethnicity in the context of the application of criminal law, measures anti Terrorism and immigration checks.

All arguments that Lega and FdI do not like: “We think it is a theme of transversal civil rights, upset From one media campaign which has fomented phenomena of violence and unjustified vandalism, which we must condemn, against symbols and representations of European and world history “.

The ECB has given yet another shower of money to banks, but not to citizens

“Not worth repeating”: Ghent must have Overpoort already after honor … (Ghent)

NEW YORK: A police officer has been charged with aiding the Chinese government

Following the acquisition of ARM by Anvidia: Siva receives a recommendation upgrade

Recommendations for tightening the closure: Closing synagogues and reducing the workforce in the workplace by 50%

Possible kidnapping in Nijmegen turns out to be conflict, three men arrested | Nijmegen

Ineos and Jumbo-Visma send cat to Brittany Classic and fined 50,000...

The United States Supreme Court has ruled that a person cannot...

are not asymptomatic contagious? The truth about the study

Coronavirus, tell me how you wear the mask and I’ll tell...

Torchlight 3, negative reviews rain on Steam for being too close...

Standard passed Welshmen to next qualifying round EL