Black Thursday, for goodness sake far from me the attempt to recall history in this case, but yesterday’s “downsizing” on Wall Street and all over the world has taken on a ridiculous dimension, in form and substance.

The bottom line is that yesterday the American small cap index fell nearly 9%, at its lowest point!

I repeat nothing in particular go up the stairs and go down taking the elevator! 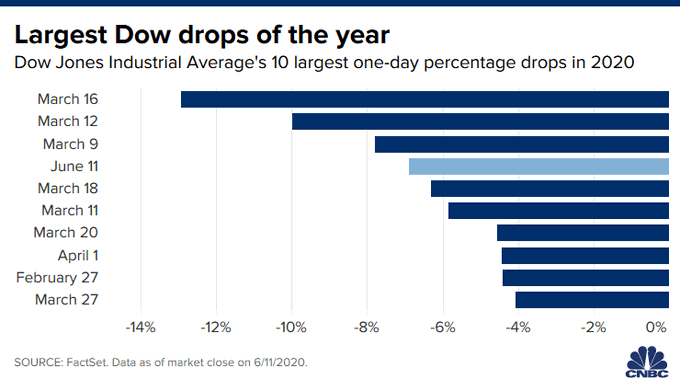 Yesterday it was only the 4 worst collapse since the beginning of the pandemic, but what makes us smile is that many forget what Trump wrote in 2015 …

If the Dow Joans, (to the American I add …) ever falls more than 1000 points in a single day, the president in charge should be “loaded on a very large cannon and shot in the sun … TREMENDOUS SPEED! No excuse!

We believe that on a cannonball, Trump will find himself no later than this fall, but this is another story that we will tell you about next time.

Yesterday Powell, he really scared the psychopaths of Wall Street, saying a half-truth, given that the situation will be even worse, that there will be no recovery AVUUUUUUU!

The Federal Reserve is wrong so often. I see the numbers also, and do MUCH better than they do. We will have a very good Third Quarter, a great Fourth Quarter, and one of our best ever years in 2021. We will also soon have a Vaccine & Therapeutics / Cure. That’s my opinion. WATCH!

Obviously our Donald, as soon as he saw the collapse of the DOW JOANS … always American, was frightened and immediately ran to write that Powell and the Fed do not understand anything, that he cannot afford to ruin the game on employment data that he did so well on Friday and that there will be a wonderful third quarter, then a quarter and a stellar 2021!

Who knows if he will be able to see it, but for the moment let’s deal with reality, a sad reality that of yesterday.

While the initial requests for subsidies drop (blue bar) the continuous requests (red bar) remain damn sustained, which means that despite the reopenings there has not been a great improvement, indeed! 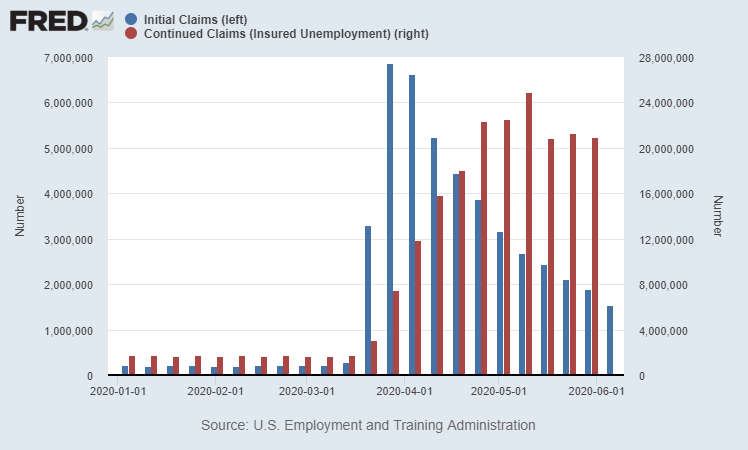 Yesterday, Mnuchin the US Treasury Minister said that even if there is a second wave this time everything will probably not be closed, probably nothing, we will have to live with the virus.

The problem is that the recent Coronavirus Aid, Relief, and Economic Security Act (HR 748) predicts that from today even the self-employed and employees of large companies can apply for subsidies and until the end of July, therefore unemployment will not decrease, let alone the requests, what sense does it look for a job if there is not and for Does the moment keep the state?

The closing of the 10-year USA yesterday is a whole program, … vast programs!

Pay no attention to the numbers, look at reality … 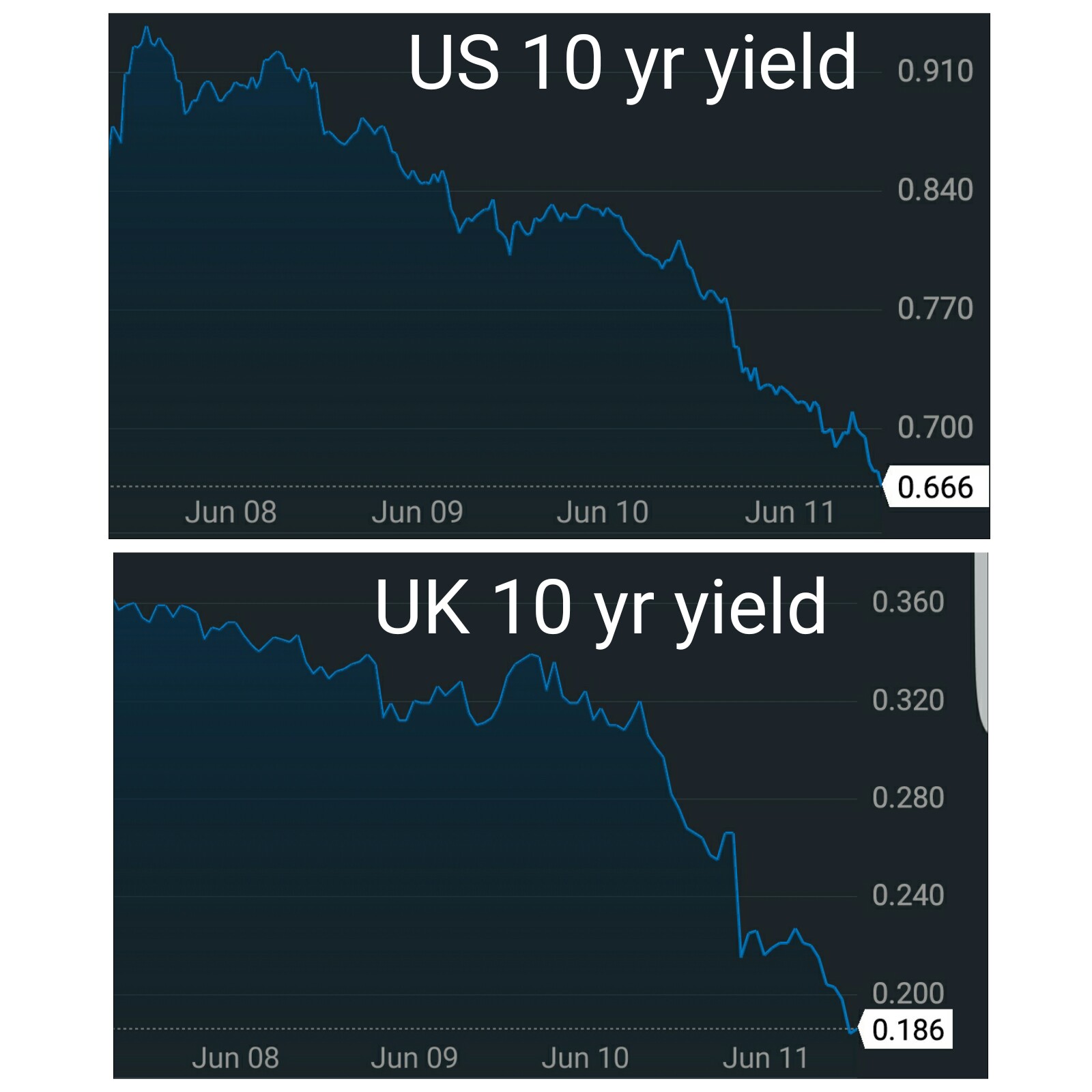 … it only took a few days and the legendary AVUUUU RECOVERY has turned into a Caporetto! 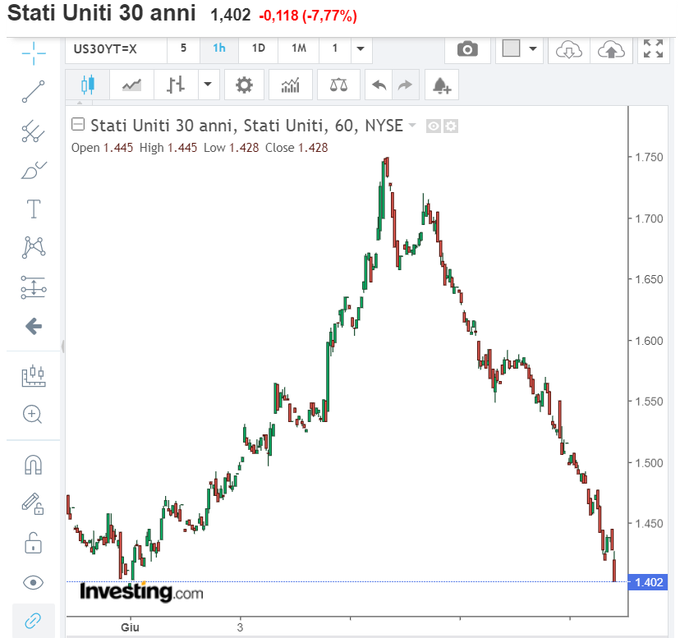 I have suggested several times in recent days to take a look at your wallets and do the spring cleaning, these occasions will never come back, there is a lot of garbage in your wallets, so much useless stuff to get rid of.

The stock markets have long been like a huge casino, the liquidity provided by central banks, the suggestions come from the shoeshine, millions of fools buy bankrupt companies that will be destroyed by history and debt deflation.

Managers can do nothing but adapt, money comes to them, then everything is created, nothing is destroyed, everything is transferred from one pocket to another.

As I wrote yesterday, there is still time, perhaps until July, volatility will not fail in the next two months, hurricanes and calm, sunny days and storms, but then in the end it will depend on which side of the regatta one will have chosen.

We in the last three manuscripts, dedicated to all those who support us freely, have traced the route, a winning route that has accompanied us for over 10 years, the route of debt deflation, the PROMISED LAND.

Well, we can close here for now, as Keynes said, the markets will take care of separating the fools from their money!

Thank you very much for your support and trust, we are happy to have shown that trust was well placed! I repeat the war will be long and we have only won almost all the battles so far, until August we will have to pay close attention, then the truth will probably become more and more daughter of the time.

Frankly, we believed we had said everything, but with each passing day, our conviction increases, that the PROMISED LAND is really around the corner!

Anyone wishing to support our trip will receive Machiavelli’s analyzes for FREE. To contribute to our trip just click on the BANNER next to the posts on the right side of the page or go to the DONATIONS section…

The news in five minutes

Rutte: the number of ‘worrisome’ regions seems to double this week

Pia Dijkstra (D66) leaves the House of Representatives after elections

AEX closes with a profit above 540 points | Financial

At the end of a big drama: Portland advanced to the playoffs

Will Resident Evil Village also be released on PS4 and Xbox One?

An outline has been found that will enable the implementation of supplementary education programs; NIS 1.15 billion will be allocated from the budget

“mothers’ walls” to protect the demonstrators

The prosecution has closed a case against five minors on suspicion of raping an...