Audi e-tron Sportback is the second step on the road towards electrification, long but less than you think given the acceleration that awaits us in the coming years for the EVs and the one already underway in the hybrid segment. The path is that of evolution: based on the MLB Evo platform, Sportback refines some small / large details. In the Q3 2020 there will be 503 hp e-tron S that will push performance even further by adding a third electric motor, the GT and Audi Q4. Finally, we will move on to the more accessible segments, while laying the foundations for the interesting “Artemis” project and we will also look at issues such as battery recycling. 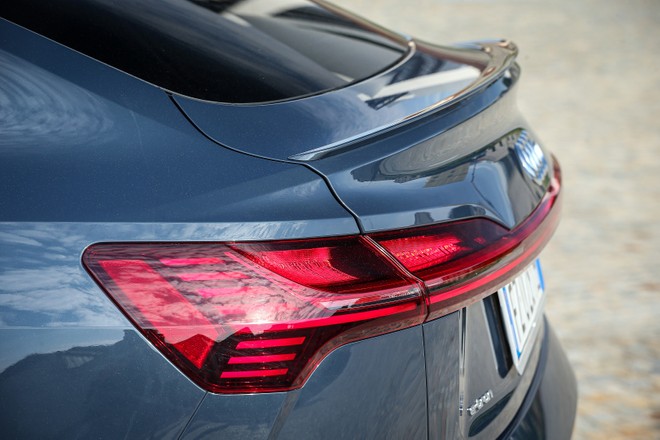 The substance does not change a lot, the attention is always obsessive: flat bottom, calender with active air intakes (between 48 and 160 km / h if the temperature permits, the upper part is independent of the lower one) virtual rear view mirrors and all those tricks that I told you about in the e-tron test.

Compared to its sister and progenitor, however, Sportback lowers the aerodynamic coefficient down to 0.25. Adaptive suspension is standard and on the highway they reduce the ground clearance by 26 mm, ready to raise the car when needed for the offroad … or for the pavement. 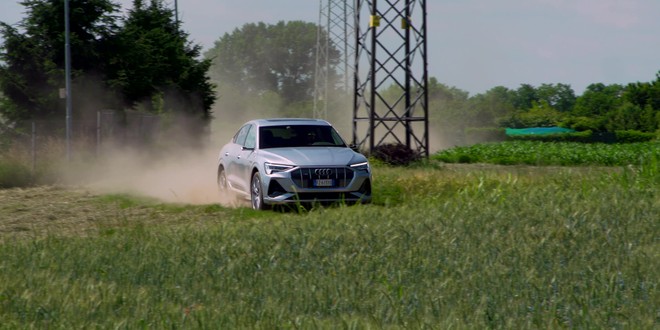 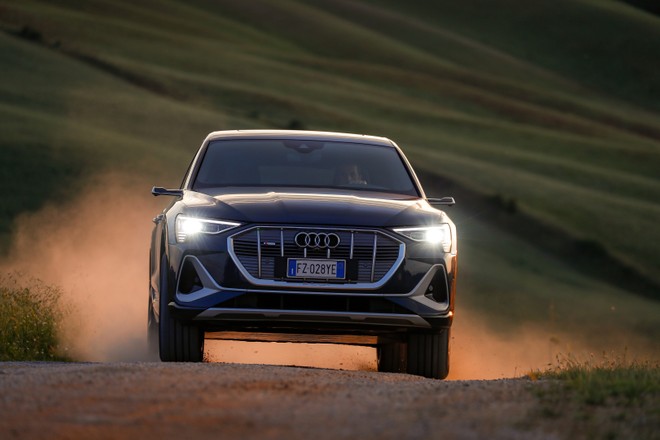 To be an SUV, e-tron Sportback successfully passes the road test, now the “high-wheel” Audi cars have achieved interesting results: very small roll, curves that can be tackled with precision, always guaranteed road holding and, in this case, also a 50:50 distribution of weights for fun, always remaining aware of the mass that we are dragging behind and the limits of something called physics.

The trick of driving pleasure is more than one: flat and neutral attitude thanks to the frame where the battery contributes as a structural element that lowers the center of gravity a lot; on the other hand, it weighs 700 kilograms (580 kg on the e-tron Sportback 50) and is placed very low. There instant all-wheel drive it makes the difference when cornering and in conditions of poor grip: everything is digital, the immediate reaction of the system is unapproachable even for the most sophisticated mechanics and this means traveling on tracks when cornering with the four wheels that are managed independently in the torque delivered by the system.

The steering is an electromechanical, progressive, pleasant, not overly multiplied and direct for the segment to which it belongs. The mass is felt when we force the foot, not necessarily in the roll because the set-up takes a piece but in the driving sensations … and it’s the usual SUV speech against sedans. Even the excellent work on the steering collides with the defect typical of all electric SUVs, the reaction of the weight during load transfers, especially the rapid ones and in sequence of the tight mix.

Waiting for the new generation, lighter and more energy-dense batteries, Audi e-tron Sportback is still positioned in the high end of the market, where only Jaguar I-Pace manages to put the wheels in the wheel for its aluminum structure. The Audi electric SUV is slightly more unbalanced towards comfort and does not betray its nature, however it is more fun than Tesla Model X for example. 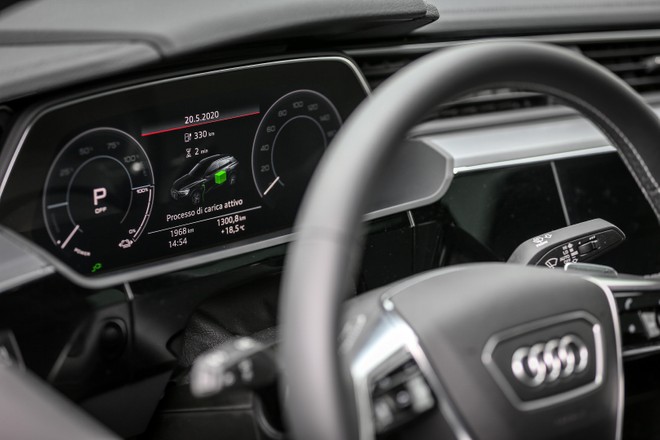 Finding a flaw is really difficult in this section. The step of almost 3 meters it would be enough to make us understand that there is room for everyone and the Sportback version of this electric SUV succeeds in an “impossible” undertaking, not eating too much light in height while making the tail lines much more attractive than the e-tron brother. Those who sit behind do not travel in a claustrophobic environment and, if they are very high, they have enough space to go down with the pelvis and not touch the roof sky. In addition, the rear passengers have all the air conditioning vents imaginable with the separate control of the third zone equipped with a touch screen exactly like the front occupants. 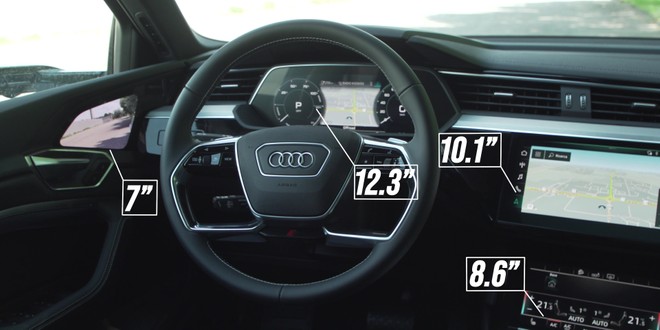 In front is a riot of comfort, quality, technology … and display: there are 5 in total: 12.3 inches for standard digital instrumentation, 10.1 inches for infotainment, 8.9 “for tri-zone climate controls and 7 inches for each of the mirrors, equipped with OLED panel.

Hyper-adjustable seats with excellent lateral support ensure the perfect fit for every driver and front passenger. Finally the acoustic comfort: e-tron Sportback is the queen of silence in its segment, soundproofed to the core. 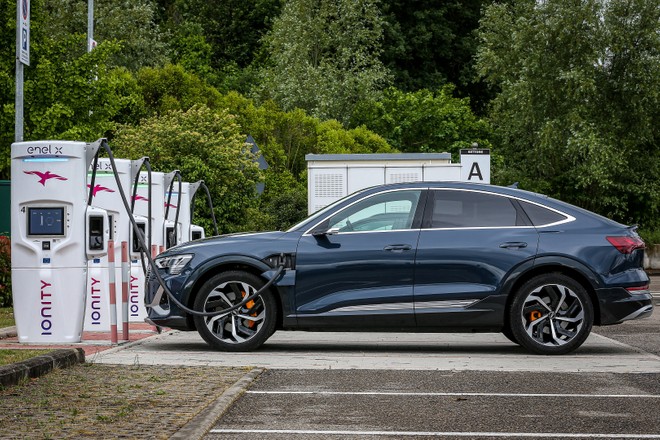 In alternating current (AC) you have an on-board charger three-phase at 11 kW which can be accompanied by an optional bringing the total to a maximum of 22 kW.

In direct current (DC) reaches 150 kW on the more powerful, 120 kW on Audi e-tron Sportback 50. Whether you choose one or the other, you still need 30 minutes to a fast column for 80% of the battery. The included card works on 140,000 stations in 24 countries (here are the costs) and, according to the promises of Audi, the plug & charge as Tesla will also arrive: plug the car on tap and this will automatically bill on your account. When? Generic 2020 but … until I see, I don’t think. 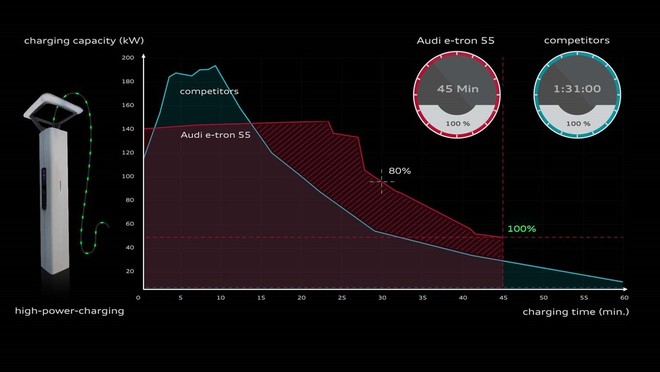 95 kWh and 71 kWh are the gross capacity data for the two batteries. The usual safety margin limits them to one nominal capacity (the one that can actually be used from charge to discharge) of 87.5 kWh and 64.7 kWh.

The battery pack consists of 36 modules (27 for the Sportback 50) of 12 cells each, encapsulated in an aluminum box and designed to minimize the risk of fire even in the event of damage. Difficult damage as the entire battery pack is protected by a 3.5mm thick aluminum armor.

How do I top it up? For home charging, you have both the charger a 230 V than the one for the lucky ones with the three-phase a 400 V. Optional the smart charger with reading of the load of the network that always travels at the maximum power allowed at any time without blowing up the meter: in short, when you start the washing machine he lowers the power during the spin cycle, raises it during the soaking cycle and so on. 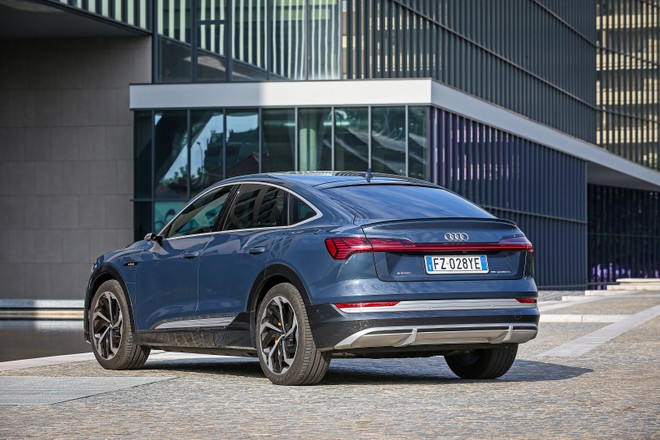 If you are not fixated, skip to the next chapter, here is “stuff” from shot. In the meantime, let’s start with the power electronics: they are two, integrated in the engine block and “drowned” in the thermal management system that involves the entire electrical part.

The inverter is that little friend that transforms the direct current of the battery into three-phase alternating current for synchronous motors … and vice versa during regeneration because the batteries reason in DC. Power in regeneration? Up to 220 kW braking from 100 km / h.

The cooling is more elegant than that of e-tron NOT Sportback, although starting from the same principle: the modules transfer heat to the underlying cooling system. The cells heat up and transfer, through conductive gel, the heat to the liquid that cools or heats by keeping the battery in the ideal range: between 25 ° and 35 °.

In the case of the Sportback, however, the liquid passes inside the windings and also deals with stators and shields. The heat generated is instead exploited by one standard heat pump that uses up to 3 kW. 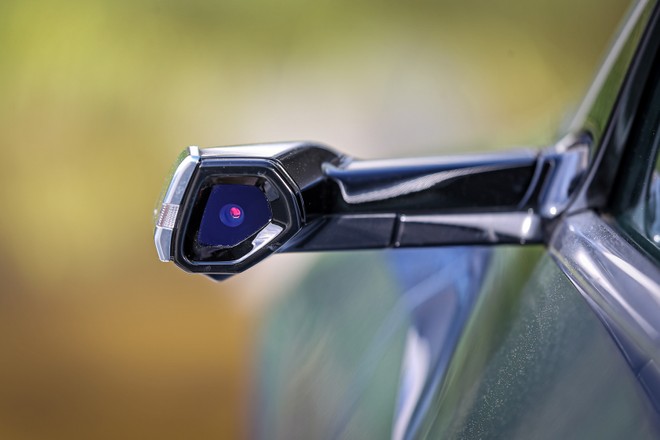 Nothing to complain about infotainment: it is connected, it has the haptic feedback that responds to pressure, it communicates with the digital instrumentation by sharing the map of the navigator for example. Very fluid, customizable and supports Android Auto and Apple CarPlay wireless.

e-tron sportback speaks with traffic lights and other vehicles thanks to the car-2-x (today in Ingolstadt and Dusseldorf, tomorrow in other European cities) and converses with Alexa to control home automation.

Autonomous driving? At the top (within the limits of European law), it is useless to delve into the sterile list of available security and autonomy systems. It can be summed up by saying that Audi looks for you at 360 degrees around the car, at the intersections, in reverse, brakes and accelerates on its own (hands always on the steering wheel) and manages the steering. adaptive cruise control is based on cameras, traffic, map and car-2-x information: it automatically decelerates on bends and roundabouts and does so by making the most of energy recovery.

L’app then there is the icing on the cake: recharge programming, pre-air conditioning and up to digital key: goodbye remote control, welcome smartphone … only Android. 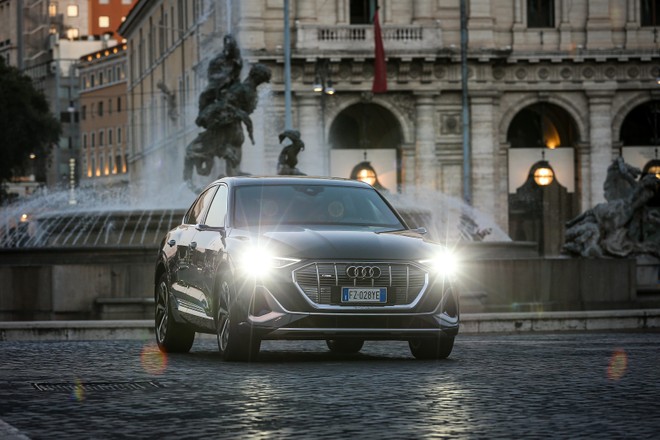 One of the big little news is the LED Digital Matrix technology that the concept of matrix headlights evolves. If with the old models it was possible to surround the object that preceded us using LED blocks, with discreet precision, today the new projectors use digital and they envelop the silhouette of the car in front of us, fitting it like a glove.

In each projector group there are 1 million micromirrors capable of changing orientation thousands of times per second. Thanks to a dedicated brain (a control unit only for this function), they do everything to make you see better. It is difficult to understand it without trying them but in any condition they adapt the light beam to speed, recognize the type of road and where the steering goes; in short, they will change your life, and it is not rhetoric. 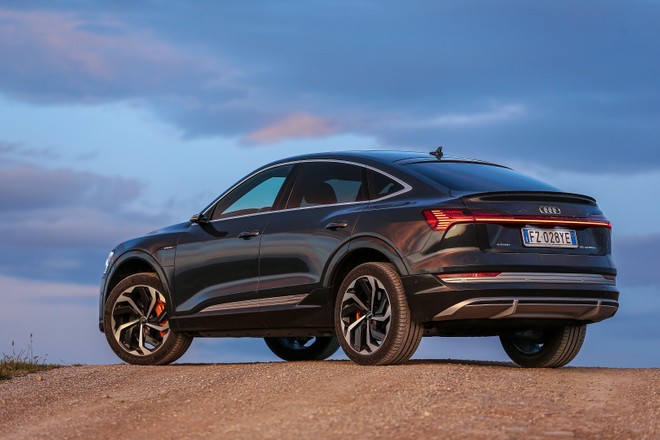 Audi top brand SUV? Obviously the prices of this e-tron Sportback could not be popular. It makes us think, however, that in the premium world the scissors compared to the equivalent with a traditional engine is much smaller because a Q8 costs € 77,000 for example. The electricity price list is as follows and does everything to encourage those who can afford certain figures to purchase:

Both standard, but not all and the interesting packages are excluded: that of the Level 2 autonomous driving, for example, you pay separately. The super-equipped Edition One reaches 117,000 euros.

Who is this electric SUV coupe winking at? It is certainly not for those who buy the Q8 to go a long way but, if the autonomy is enough for you and you have at least a 7.4 kW at home (or at work) for charging, then it can do for you.

Sportback e-tron, on balance, is the refinement of Audi’s first generation electrical design and can be considered the son of the e-tron who surpasses the father but keeps his genes… files defects but does not eradicate them. Because in the end the genes are always the same: in this case it is the type of bodywork (the fact of being a “big SUV”) that acts as a limit, together with the battery technology available today. While counting on a good brake system, the almost two and a half tons are felt when you go to clamp on physics, be it the gravity downhill or the friction coefficient of the asphalt. High consumption which generally stands between 24 and 30 kWh, from the city to the highway.

If you are interested in e-tron Sportback you could consider the following alternatives:

Result Statement: After applause also better wages | What you say

From coffee machine to holy water column, Waard’s company is adapting due to the corona crisis

From 2022, our electricity bill will be calculated differently: whoever causes a power peak will pay more

LeBron James and his life as a political leader

Coronavirus: contagion slows down in Lombardy, cases increase only in Liguria (56) – La Stampa

New witness: “I saw Maddie McCann at a supermarket three years ago.” Abroad

Italian Cup: schedules and live TV of Juventus-Milan and Napoli-Inter

these improvements make the mode even better