Rome, May 31, 2020 – Tragedy a Neptune, near Rome, where a ultralight is precipitate. Both occupants are deceased the impact. The accident occurred near via Avezzano, at the flight school of Crazy Fly of Neptune: it happened when it was just past 10.

The accident cost the pilot his life Gioele Rossetti, 23 years old Roman and passenger Fabio Lombini, 22 year old from Castrocaro Terme, both swimmers. It seems that the ultralight was from Rossetti’s father. The young pilot had considerable flying experience.

Lombini, silver at the 2017 absolute winter championships in the 200 freestyle in 1’44 “60 behind Filippo Megli and ahead of Filippo Magnini, already national at the Taipei Universiade and at the European short-tank championships in Copenhagen in 2017 (eighth in the 200 freestyle in 1’45 “05), he was carrying out a collegiate training at the federal center of Ostia followed by the technical manager Stefano Morini and accompanied by his coach Alessandro Resch. 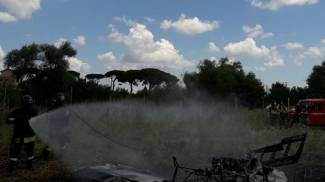 There Swimming Federation, “shocked and astonished, expresses the heartfelt condolences to family, friends and society to which they belong. The sentiments of condolence from President Paolo Barelli, honorary presidents Lorenzo Ravina and Salvatore Montella, vice presidents Andrea Pieri, Francesco Postiglione and Teresa Frassinetti, of the general secretary Antonello Panza, of the council and of the federal offices, of the technical director of the national swimming team Cesare Butini and of the whole aquatic movement “.

On Twitter, i fire fighters they write: “Finding out that the young swimmers Fabio Lombini and Gioele Rossetti died in the accident of Nettuno shocked us. Fabio, 22, was an athlete of the Red Flames. The Department Chief Mulas, the Chief of the Dactyl Corps and the firefighters they cling to the pain of families “.

The National Flight Safety Agency (ANSV) has opened an investigation incident. The Agency also sent its own investigator to the venue. The aircraft – according to initial findings – would have crashed about 30 seconds after take-off and, touching the ground, caught fire. Investigations are underway by the carabinieri of the Anzio company. At the moment a technical fault is assumed.

Wall Street fallen in the Cesarini area, a flywheel for Modern and BioNTech

Volkswagen ID.3: from July 20th everyone will be able to order it

from Australia to Morocco, all countries returned to lockdown. PHOTO

on the front page the names of deaths at the hands...

Recovery fund, how 750 billion will be spent: 10 European programs...

Autostrade, Atlantia: “We have no intention of going out”. Renzi...

Salvini, The Beast is in crisis and the polls continue to...

Coronavirus in Lombardy, 293 new infections on 19 thousand swabs: “We...