7pm – subscribe to the newsletter e
get the latest updates in your inbox.

In Tuscany part two of the distribution of the masks. After a first batch of 43 million delivered to citizens through municipal pharmacies, distribution will take place from newsstands from 5 June. The regional council led by Enrico Rossi Sunday reached an agreement with associations and unions to deliver over 40 million masks by the end of June: 10 for each Tuscan citizen. To get them, just go to the newsstand with your health card: newsagents will be provided with an application that can register the card and provide everyone with the first package of 10 protection devices.

Waste disposal during Covid, M5s: ‘To limit the use of incinerators and landfills, just extensions and derogations from ordinary management’

The go ahead it was after a confrontation between the Region that the newspaper had The nation as partner, and the section of newsagents of Confesercenti Fenagi. Governor Rossi defined the first batch of masks delivered to the pharmacy “a truly impressive quantity which I believe was a valuable aid for the protection of the health of Tuscan citizens”. Until June 4, citizens will be able to continue to collect the last masks left in pharmacies and then from Friday those distributed by newsstands. In the next few hours, the 1240 newsagents of Tuscany will be given the indications for download the app (it is not yet clear which one) that via smartphone, tablet or PC will be able to “read” them health cards, thus avoiding cases of hypothetical “sly” who may want to withdraw the masks several times. The distribution will be in two tranches: the first which provides for the delivery of 10 masks for each citizen and a second that will be established by the end of the month, depending on availability, to increase the number up to a maximum of 20/30 protections per person. In the pharmacy, however, the masks will be sold for a fee.

The agreement came after a negotiation that started in the last few days with the trade associations. Several Tuscan newsagents had not taken the Region’s decision well in light of the gatherings that had been created in Tuscan pharmacies and supermarkets at the beginning of the free delivery of the devices. The newsagents, represented by Fenagi, accepted for “civic sense” rather than “economic interest”, explains the president of the Health Commission of the Tuscany Region Stefano Scaramelli: newsagents will in fact receive 2.5 cents from the Region for each package. The will of the Region and of the more than 1200 newsagents, however, is also to expand its customers with respect to those who continue to buy newspapers on newsstands. In addition to the payment of bills, health tickets and telephone top-ups, the parcel collection service has also been active in the Tuscan newsagents for a few days. The objective of the Region is to distribute masks by exploiting “the widespread network of retailers scattered throughout the territory”. 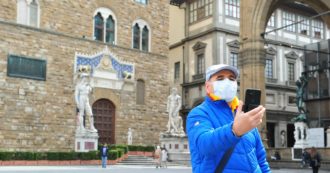 Phase 2, the “gradual” restart of Tuscany. Rossi: “Be careful or go back”. Mayors: “Social tension too high, who can reopen”

Since the beginning of April the Tuscany Region has distributed free of charge 55 million masks, of which 43 through pharmacies and 12 through large retailers (4 million) and door to door of municipalities (8 million). In the first phase of delivery, several problems related to distribution had arisen because pharmacies and supermarkets had been literally stormed causing gatherings, tensions and cases of “sly people” who repeatedly withdrew the protections without any consequence, so much so that after a few days it had been decided to remove delivery to supermarkets. The Region has ensured that the the same problems will not be repeated with newsstands: the first tranche of 10 masks will ensure that Tuscan citizens will not have to return to collect them often.

Orange vests, Pappalardo makes a stop in Bari: “The pandemic does not exist”. Christian family: “Meeting of idiots”. In Milan, fines waited

Movements between regions, self-certification and reopening of cinemas and discos: what changes and what cannot be done from June 3

Municipality of The Hague: twice as many people on the coast as normal

Belza Wedding: The investigation was unexpectedly transferred to the Jerusalem Police Station

Chaos on the coast: day tourists not welcome in Knokke-Heist and Blankenberge, pre-alarm phase in Ostend

A very expensive burger: man caught when he rules curfew …

Morocco among the most affected countries

Washington shooting incident: At least one killed and 21 wounded

Coronavirus, another 117 dead. Contagion on the rise, but more swabs

iPad Mini 6: everything you need to know