On the day that Diego Armando Maradona left the earth, Ajax did good business in the Champions League. FC Midtjylland was simply defeated, partly due to mistakes made by the Danes themselves. What was Ajax’s plan and what did Midtjylland do wrong?

Ajax with the normal structures
Where European matches sometimes start with original, clever plans, such as Ajax did against Liverpool, for example, this is not the case with Ajax. The team from Amsterdam play from the familiar 4-2-3-1 formation. As usual, this will be a 3-1-5-1-like setup in possession. The backs Nicolás Tagliafico and Noussair Mazraoui go high and wingers Dusan Tadic and David Neres have the freedom to move in.

In the build-up it is the eighteen-year-old Gravenberch who lets himself down next to the defense to support the build-up. As we are used to from them, Ajax steps forward defensively with the back. This time it is right winger Neres who, together with striker Lassina Traoré, secures the central defenders. When Midtjylland reaches left back, Mazraoui steps on to apply pressure. The central defenders are one-on-one. 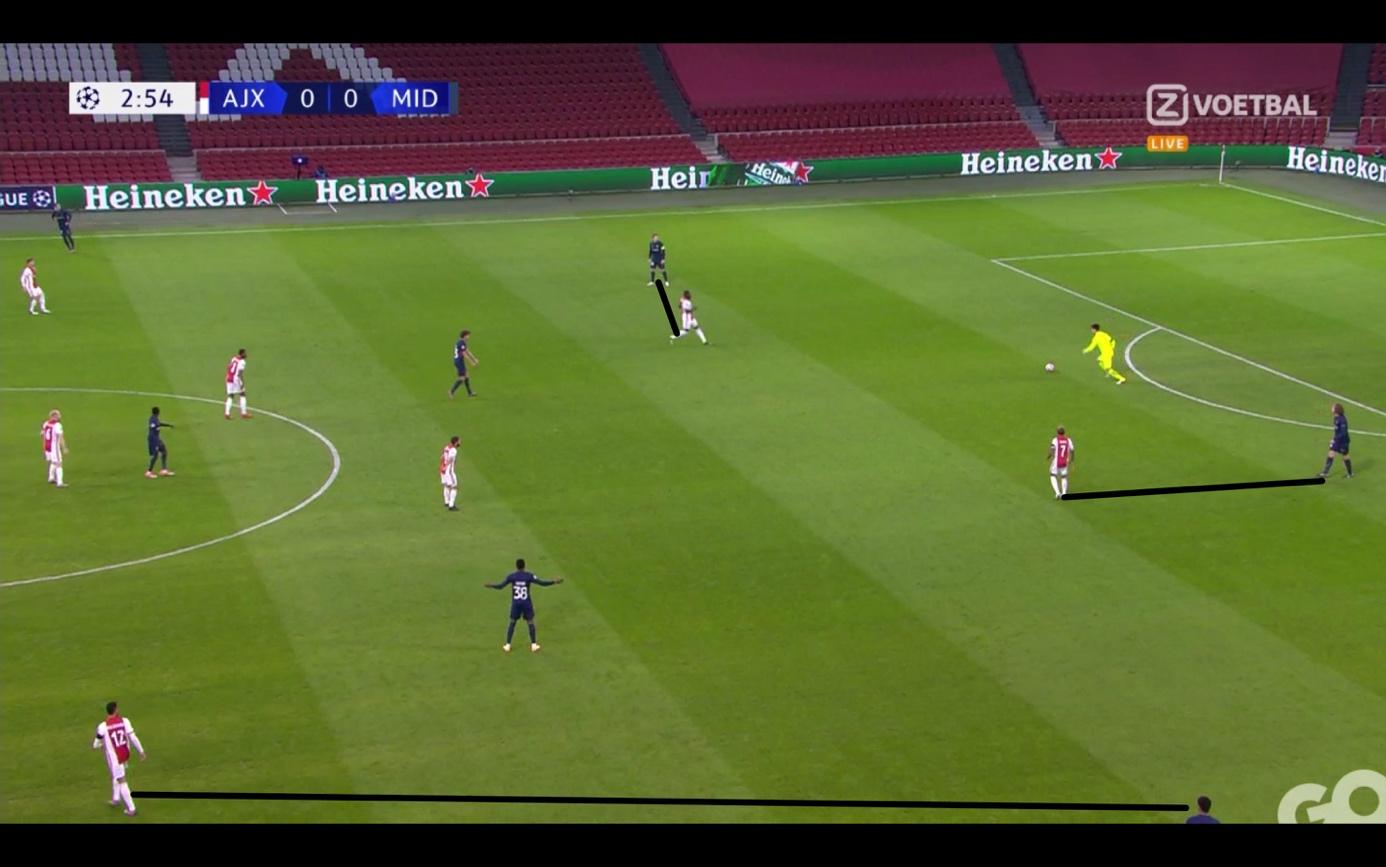 Neres and Traore lock up the central defenders. Mazroui steps on to the back. Source: Ziggo Sport.

Midtjylland’s plan
Contrary to Ajax, the Danes seem to have specially adjusted to this match. In possession, Midtjylland chooses to let right winger Anders Dreyer pull in a lot. This ensures that Tagliafico comes along, after which Midtjylland tries to use the space that opens up on the side by having striker Sory Kaba run in that direction. 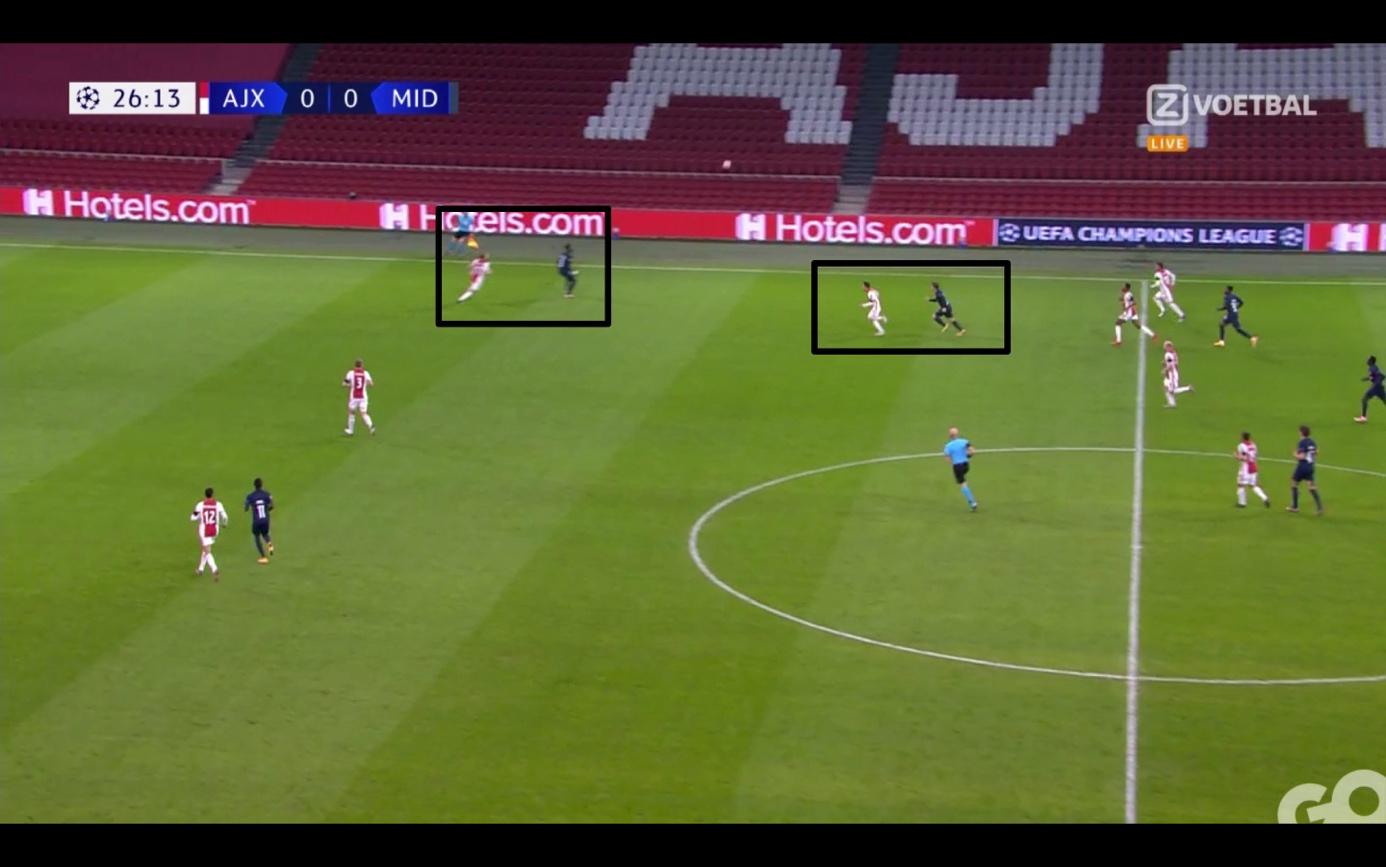 The Midtjylland winger pulls Tagliafico inside, the striker tries to use the space in the corner. Source: Ziggo Sport.

In addition, the Danes try to switch quickly when capturing the ball. They mainly try to use the space behind the high backs of Ajax, after which right winger Dreyer makes a diagonal running action in the space behind the defense. Several times this leads to small counter-punches from the Danes.

How Midtjylland shoots itself in its own foot
Besides the fact that Ajax is qualitatively better and dominates the game, Midtjylland also makes it even more difficult for itself in three parts.

1. The team is not compact when defending
Midtjylland cannot be denied guts. Where most teams collapse against a stronger opponent, the Danes try to lock Ajax high and if this fails at least halfway through the half. There is no chance of collapsing to your own half.

Whether it is smart is verse two. The Midtjylland forwards often step forward, but the defenders don’t seem to mind playing with a lot of space in their back. This constantly leads to the Midtjylland team being stretched apart and the distance between the attackers and the last line is about 40-50 meters. As a result, Ajax can often quite easily find a free midfielder or play someone between the lines. This is where the second goal comes out. 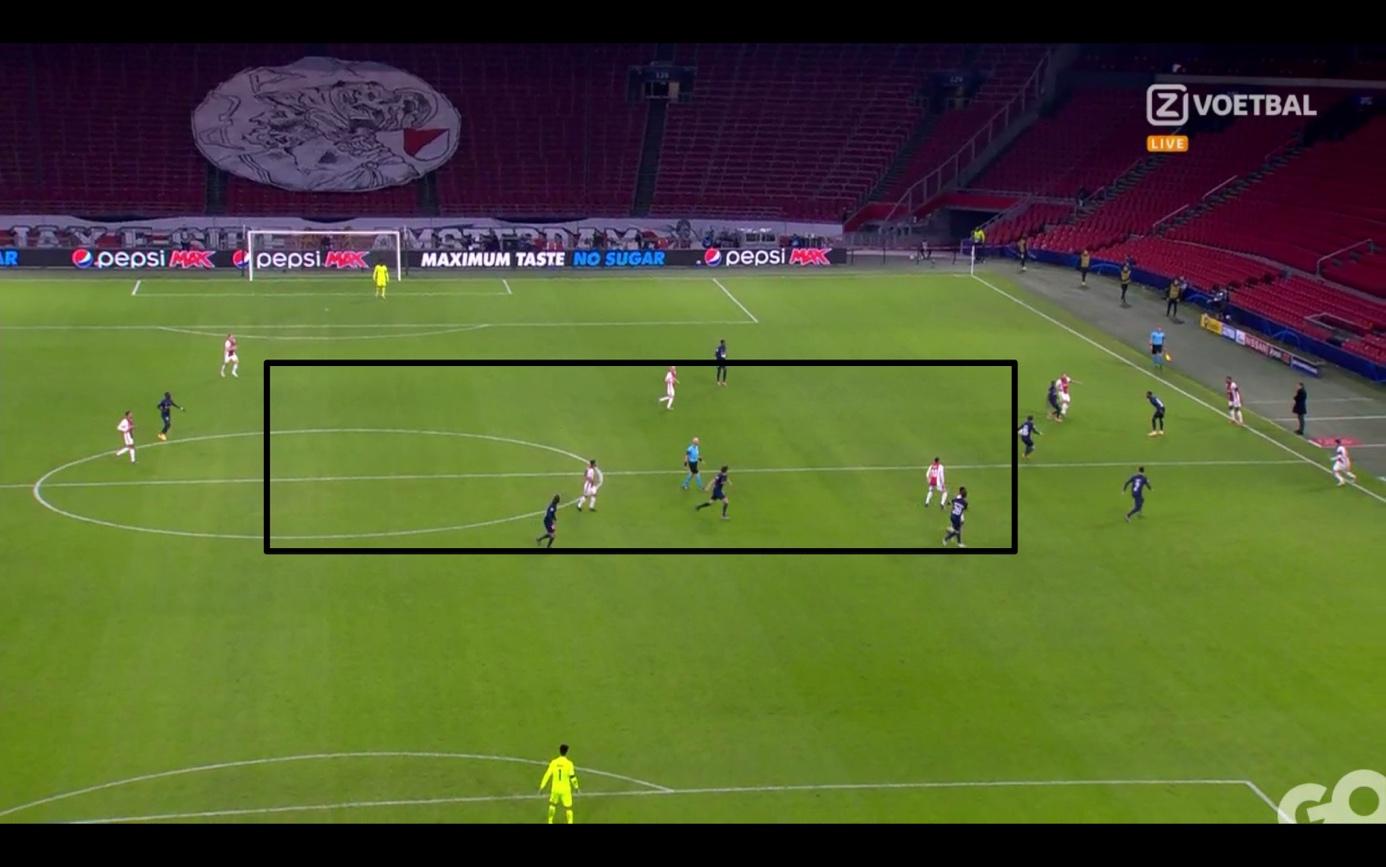 The build-up to the 2-0: Midtjylland tilts very far to the side of the ball, but when there is not enough pressure on the ball there is a lot of space between the lines. Source: Ziggo Sport.

2. The remaining defense is not organized
Almost every time Ajax conquers the ball in its own half, Ten Hag’s team has the chance to set up a dangerous counter. Midtjylland is not well organized when the ball is lost, there are no players who can immediately put pressure on the ball and ensure that the rest of the team can organize themselves behind the ball again.

The players who do put pressure are often too far away, so that they do not get any pressure on the ball and can no longer support the defense because they put pressure forward. This also partly has to do with quality. The Danes cannot keep the ball in the team long enough to create a structure in possession that allows the team to provide good pressure when the ball is lost. It is that Ajax, especially in the first half, does not handle the chances carefully.

3. Midtjylland tries to rebuild when it cannot be done
With goal kicks, Midtjylland invariably plays the ball for a long time to continue playing from the second ball. From open play, the team does occasionally try to build up well from behind. The disadvantage that the team experiences as a result of this is that, when Ajax is in concert when putting pressure, the ball is often lost in the first phase of the build-up.

An example of this is the 3-0. Midtjylland tries to build up from behind and manages to find a free agent. However, there is no follow-up and from the switchover situation that arises after that, Ajax immediately manages to make the 3-0. 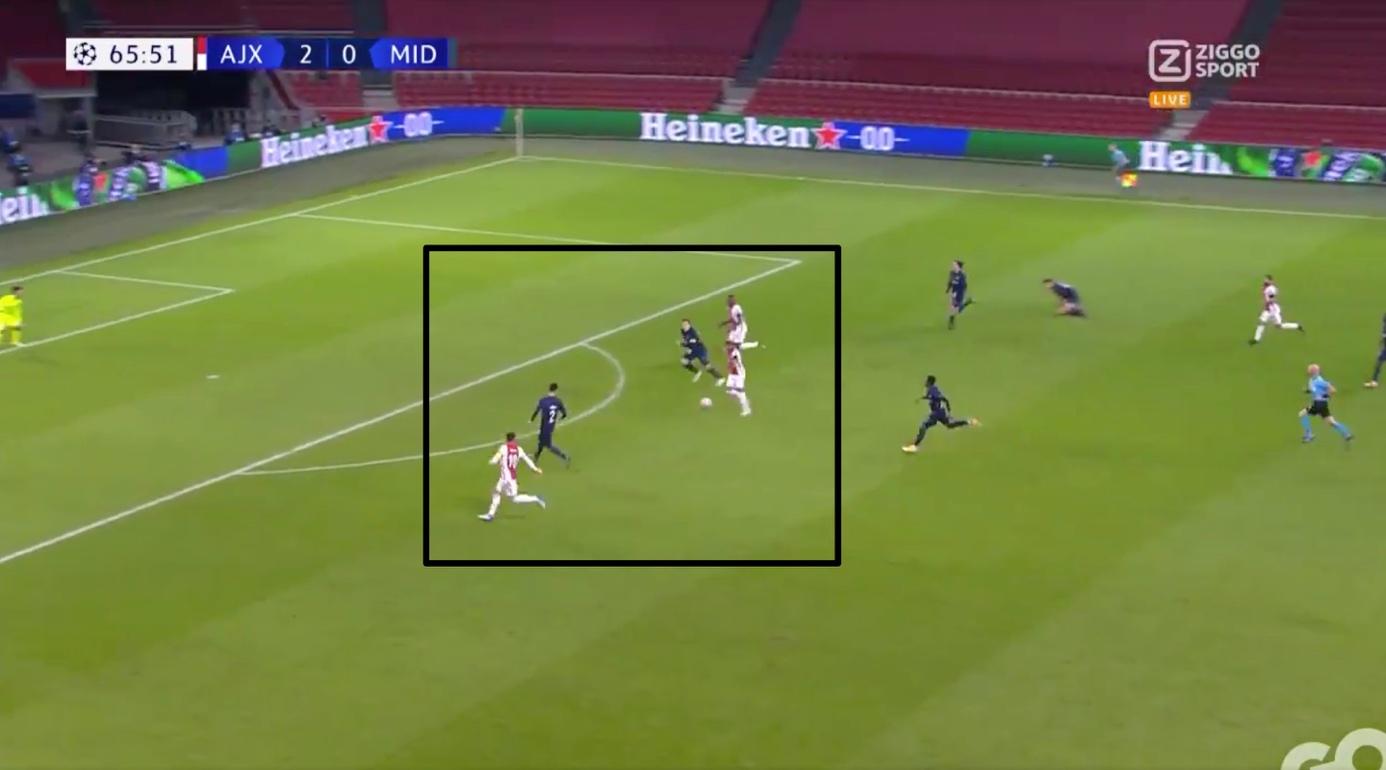 Ajax conquers the ball in the build-up and with one pass, the team from Amsterdam managed to create a three-against-two situation, after which Neres made the 3-0. Source: Ziggo Sport.

Nasty aftertaste
What will stick with Ajax in particular is not so much that the team from Amsterdam could have won 6-0 or 7-0 with a little more concentration and precision, but above all that, thanks to Atalanta Bergamo’s win at Liverpool (0-2) have always been unable to distance themselves.

Evert van Zoelen is an analyst for the YouTube channel TheNextManager, has written for tactics websites and magazines such as Spielverlagerung, TrainersMagazine and Futbol Netradince and watches important matches for VoetbalPrimeur.

Danish media do not hold back and see ‘Ajax star’: ‘go home naked’

Miles and Peter are chatting away in the teaser for Spider-Man:...

Street shops will open on Sunday

Netanyahu: “Warns terrorist organizations in Gaza – do not try us,...

Roest starts the hunt for the first national all-round title with...

Check boundaries, put restrictions and fly on ourselves