You don’t need a Mac with an M1 chip to see if your frequently used software has already been made suitable. You can also already view it on your current Intel Mac and decide whether the switch is feasible for you. Many apps have already been updated to a universal version so that they work well on both an Intel Mac and an Apple Silicon Mac. In this tip we explain how you can check whether an app has already been made universal. If not, you can often still use the software, thanks to Rosetta 2. The app is then run in emulation. Not the most optimal, but it often turns out to work well.

There are 4 ways to check if software is optimized:

# 1 This is how you check universal apps in macOS

By sorting by Kind you can see exactly which apps are Intel-only.

You can also add the indication here 32-bits in Others see standing. ’32-bits’ are older apps that are not optimized for the current 64-bit processor and can no longer be used. You can remove it from your Mac. For example, “Other” could be old IPAs of iOS apps you once stored locally on your Mac. 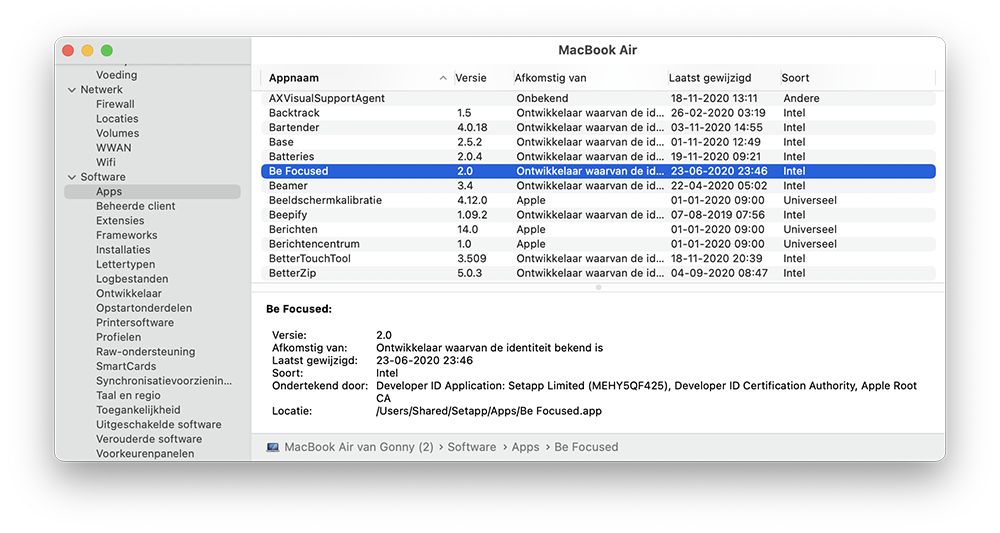 # 2 Check single apps
If you want to check whether one app is universal, you can do it as follows:

The maker of iMazing has created a free tool that shows you whether your software is optimized for Apple Silicon. The app is called Silicon and is open source. You can find it on the iMazing website and the source code can be found at GitHub. You drag individual apps to Silicon to see if they are suitable. You can also have your entire App folder scanned for suitable apps.

You can also check on various websites whether an app is optimized for Apple Silicon. The most famous website is this: Is Apple silicon ready? Here you will find a database of apps, with the indication whether there is a universal app and / or support for Rosetta 2. You can also see which apps are not working at all.

What to do if your favorite software is not yet universal?

If the software you need is not yet adapted for Apple Silicon, you can do two things. You can search the Internet for experiences using Rosetta 2. The Intel version of the app may work fine with emulation. This is the case with 1Password, for example.

You can also check with the developer to see if a beta of the universal app is available. This is also the case with 1Password. Regular users will not get to see this universal version yet, but if you sign up for the beta you can already try it. You will have to put in some effort yourself.

If none of this turns out to be the case, you could urge the developer to make a universal app. However, as with the transition from 32-bit to 64-bit apps, not all developers are willing to do so. Sometimes an app was nothing more than a hobby project or they are now working for a completely different employer.

With the transition from Power PC to Intel, Apple stopped supporting Rosetta three years after its release, so keep in mind that unmodified apps may become unusable in a few years. Apple will probably still warn developers early to ensure that they still make their apps universal. For Apple, Rosetta 2 is a workaround to make the transition smoother, it won’t be a permanent solution to keep old Intel apps running indefinitely.

What are Universal Mac Apps?

When you think of the term ‘universal apps’ you may think of apps that are optimized for both the iPhone and iPad. Or maybe you are thinking about universal purchases from the App Store.

But when we talk about the Mac, we are talking about software optimized for both the Intel processors and the Apple M1 chip. When developers update their apps for Apple Silicon, this results in a ‘universal binary’.

Because this is the second major switch (from PowerPC to Intel and now to ARM), it is also referred to as Universal 2. The accompanying emulation software is also called Rosetta 2. A universal app works equally well on both platforms. If an app is not yet universal, Rosetta will take action to translate the Intel x86-64 code into code that can be processed by an ARM-based processor.

Which Mac software has already been adapted for Apple’s M1 chip?

If you’re considering a Mac with an M1 chip, you may be wondering if your software has already been updated. In this article, we want to provide an overview of the status of the most popular apps, such as Office, Chrome and Photoshop.

Why you still wear a Chinese mouth mask

Friedman: “I have no doubt that other members of the Arab...

Sony confirms that all PlayLink games will also work on the...

Another ‘golden shower’ for Patricia Paay

Thanksgiving Trauma In The Making: 30 percent of Americans are celebrating...

The Economic Crisis: The Proposal of the President of the Association...