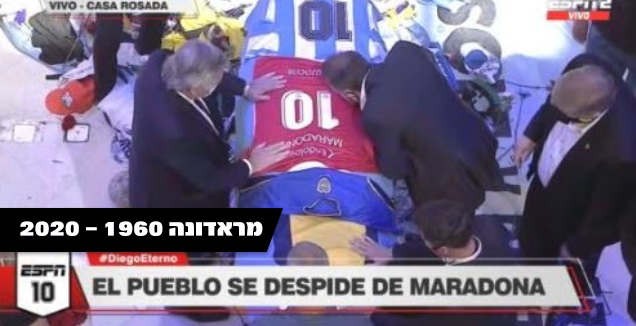 Buenos Aires is filling up with more and more people ahead of the burial of Diego Maradona later today (Thursday). Starting in the morning, crowds of people keep coming to the Casa Rosada, the president’s house, where the tomb of a legendary man who died of a heart attack at the age of 60 arrived.

The president himself, Alberto Fernandez, also arrived and at the entrance met the faces of the thousands of Maradona fans who came to pay their last respects, after which the president put an Argentina shirt on Diego’s coffin. The president’s arrival is in fact the final stage in Maradona’s coffin transfer ceremony before he is buried in a cemetery on the outskirts of Buenos Aires. Watch the live broadcast from the farewell to Maradona:

Meanwhile, even in Naples there is pain and respect for their idol. Aside from changing the name of the stadium from San Paolo to Maradona, the club plan to commemorate it in an exciting way in their game tonight in the Europa League against Rijeka at the home stadium.

In Naples, they plan to screen Maradona clips as an actor and in the background, instead of a minute of silence, applause will be heard out of respect for the late Argentine. Also in us, Diego Maradona Jr., Separate: “The captain of my life will never die.”

In addition, at the FIFA House in Switzerland, all the organization’s flags were lowered to half-mast in light of identification with the Argentine’s death.

Meanwhile, Argentina are worried about the direction of Alejandro Sabella, the Albiceleste coach at the 2014 World Cup, who has been hospitalized urgently in recent hours. Sabella has had a number of heart problems and more than once recently came for tests. He is currently in hospital in Buenos Aires.

RIVM reports 8123 new infections, but figures are incomplete due to...

The petition of the citizens of Maccabi Haifa and B’Shlosha was...