On August 18, in celebration of the announcement of Joe Biden as the Democratic presidential candidate, one demographic representation stood out. That segment of the population was the decisive voice that gave President Donald Trump his most notable victory yesterday, in the key state of Florida.

Recent data shows that Trump has managed to sweep voters from the Hispanic community in the Miami-Dade County, mostly Cubans, and erode Biden’s advantage in the county to just nine points. 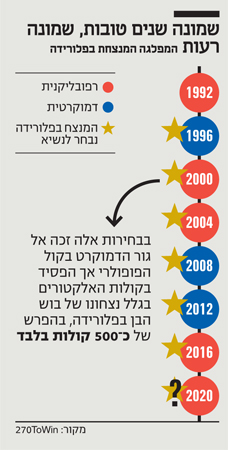 In 2016, Hillary Clinton won the county, which is the most populous in Florida, by 30 points. This dramatic fall, without Biden compensating for the lag in other areas of Florida, cost him a loss in the state, for all 29 of its electors.

After Trump was declared the winner in Florida, Congresswoman Alexandria Oxio Cortez concluded in a depressing tone: “I will not respond to the election results because these are still emerging, but I do say that we have long been ringing warning bells about the Democratic Party’s vulnerability among Latin voices and there is strategy. Through, but the effort required was simply not invested there. “

Occio Cortez knows something about this strategy firsthand. The young politician is undoubtedly one of the most prominent voices in American politics in recent years. Still, the Latin Community star won 90 seconds of screen time at the Democratic convention that declared Biden a candidate. A former Republican governor, quite gray, was given four minutes that evening. Julian Castro, the only Hispanic to run in the Democratic primary, did not get a single second.

Trump took advantage of this disregard in Miami. As part of his campaign in the region, he has repeatedly described Biden as a socialist, paralleling the Democratic candidate with controversial regimes and leaders, such as Venezuelan President Nicolas Maduro and Cave Guevara the Cuban revolutionary from Cuba.

The Hispanic community has 32 million eligible voters, the fastest growing minority community in the U.S. Therefore, its role in elections is growing. Of course, not all Latin voters are the same. There are large communities in New Mexico, Arizona and even New York that traditionally vote. Democrats.However, Florida has a high concentration of Cubans, Venezuelans and Colombians that Trump has managed to conquer.

In the past two years, he has repeatedly rallied in the region, announcing, among other things, the end of communications with Cuba, the remnants of Obama’s policies, and declaring seven sanctions to be imposed on Venezuela, Cuba and Nicaragua, socialist states whom his adviser John Bolton called “tyrannical troika.” Or alternatively the “terror triangle”. All this in front of an enthusiastic Cuban-American audience.

Biden chose to woo the voices of the black community and lower-class white men. The disregard was evident as early as August, when polls pointed to its weakness among this demographic segment. Only 59% of them said they would vote for Biden, compared to 66% who said so about Clinton in 2016.

Steijn is pissed off after NAC massacre and hits back to...

How is the Sabbath “Life of Sarah” celebrated in the Corona...

Wim Opbrouck and Jeroom, super spreaders of the baking virus: …