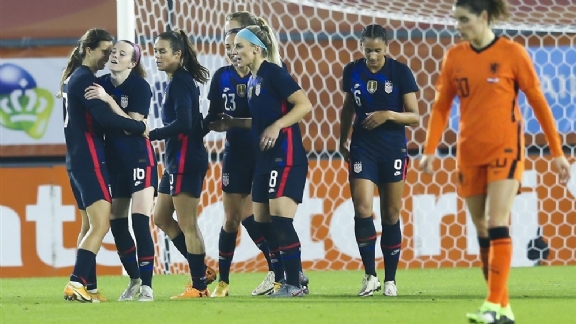 The Orange Lionesses failed to take revenge on the United States on Friday evening for the lost World Cup final of 2019. The Netherlands lost no chance with 0-2 in the Rat Verlegh Stadium in Breda. The defense of the Orange could hold out for a long time, yet the Americans scored twice via Lynn Williams and Kristie Mewis. The Netherlands hardly offered anything in return.

The United States started the replay of the World Cup final without star players Alex Morgan and Megan Rapinoe; striker Vivianne Miedema was the most important absentee in the Netherlands. The number one and four in the world rankings started the friendly match with caution, although it was the visitors who clearly took the initiative. The US got the first serious chance after seventeen minutes of play. Lynn Williams received the ball in the penalty area and cut out her direct opponent, after which the right winger just missed the goal with a placed shot.

In the 29th minute, the team of national coach Vlatko Andonovski thought to open the score. Christen Press simply bypassed Sari van Veenendaal and finished nicely after she received a splitting through ball from midfield, but the linesman rejected the goal due to offside. For a long time it looked as if there would be no more goals in the first half, but just before half time the away team struck. Lieke Martens suffered, not for the first time, dangerous ball loss in half of the opponent and the US were very fast in the switch. Rose Lavelle was reached on the edge of the sixteen-meter area and the midfielder then curled the ball nicely past Van Veenendaal: 0-1.

In the second half, the world champion decided to take his foot off the accelerator, giving the Lionesses a little more air. Still, the team of national coach Sarina Wiegman, who herself was absent due to family circumstances, was not in a position to break through the American defense. The game certainly had few highlights in the second half, until the guests dealt the final blow after 71 minutes of play. After a distant kick from the American goalkeeper, the ball ended up with Kristie Mewis: the substitute midfielder came face to face with Van Veenendaal and did not fail: 0-2. In the final minute of regular time, the Orange women crawled through the eye of the needle; substitute Morgan saw her goal disallowed due to offside.

Official: Americans born in Jerusalem will be able to register Israel...

Already 600 soldiers and civilians have been killed in Nagorno-Karabach

The Pimi Foundation sells about 33% of its simplicity to Phoenix...