The attack that the IDF carried out last night (Wednesday) in response to the cargo scene unveiled yesterday in the southern Golan Heights was called for, not only in its intensity, but also in its address – this time the correspondent was none other than Syrian President Bashar Assad.

Documentation of the neutralization of the cargo scene that was exposed in the Golan Heights, yesterday // Photo: IDF Spokesman

Unlike the campaign in the south of the country, Israel has a much stronger lever in the north. Hezbollah and the Shiite militias that roam Syria, called Iran, allow themselves to carry out attacks from sovereign territory of countries. Therefore, Hezbollah’s provocation is the responsibility of Lebanon, and accordingly, any action leaving Syria is the responsibility of Assad.

There is a price to pay for a sovereign state allowing militias to operate out of it, no matter if it is Iran or any other entity. Last night, the IDF attacked with great precision, and even hit the Syrian army directly. Moreover, the Israeli army echoes this message openly and openly, saying – “Do not get confused, Syria on target.”

The decision to attack Syrian forces is right. This is a calculated strategy of the decision makers, under the understanding that Assad, who is trying to recover from a bloody civil war, must understand that if he is interested in stability, he cannot allow the Iranians to hold their war pits in its territory. If he does not work – he will pay the price. And now, the ball is moving in his direction – is he interested in deteriorating the situation and taking risks, or will he turn to the Iranians and try to curb them?

But not only Assad is the address here, but also his patron – Russian President Vladimir Putin. It can be assumed that if there has not yet been a telephone conversation between Prime Minister Benjamin Netanyahu and the Russian leader, it will take place in the coming hours. Putin also has a clear interest in stability in Syria, given the direct and massive efforts he made at the end of the war in the country. This is not the first time Putin has been required to bring order to the alliance between Iran and Syria, which allows the ayatollahs to conduct military operations from the Golan Heights.

And yet, let us not forget the key variable – the situation in the United States. Last night, it may be at this point that Putin is ready to take advantage of the weakness of the US administration that is in political chaos, and “on the road” to arm Syria with surface-to-air missile batteries. After all, money is what speaks. 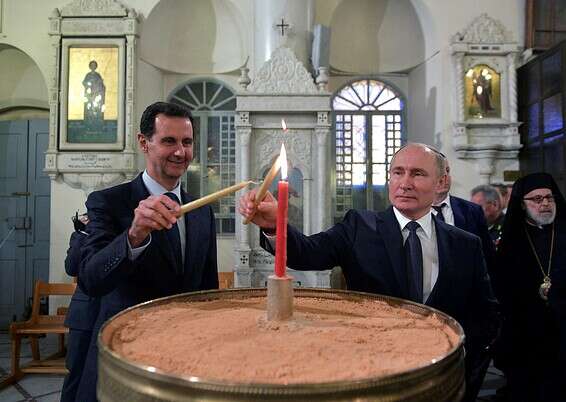 Once again we can identify the powerful politics involved in regional politics, and all as a pharmacy. Tensions in the North are not expected to subside any time soon, unless incumbent US President Donald Trump decides he wants to demonstrate power, perhaps as a closing chord, perhaps as disagreement, with what is happening in our region. And Trump, as we know, is unpredictable.

The IDF’s response to Syrian forces on the Golan Heights front line means that short-term readiness will change in the Golan Heights. The next few days will prove where the “wind is blowing”. As far as the Iranians are concerned, it would be right at this stage to take action on the understanding that Biden’s aliyah signifies a renaissance for them – perhaps this is not the time for them to act beyond what was done in the southern Golan, through a cargo arena waiting for the IDF.
Meanwhile, foreign reports of the assassination of an Iranian agent by the Mossad must also be taken into account, and this incident also has an impact. The notebook in the Middle East is definitely open, and the hand continues to register. The Israeli strategy in the north, so far, has worked well. We did not degenerate into war or escalation on the one hand, and inflicted significant damage on Shiite militias on the other. The IDF has been comfortable operating in the past, both because of the chaos that has prevailed in Syria and because of the American backing we have gained in recent years. However, in the coming months, all this may change, and hence Israel may need to adjust its strategic considerations.

The writer is a former commander of an armored brigade. He is currently a researcher on military-social relations and the author of the books “The Man in the Tank” and “Clear Direction”.

Famke Louise is fed up with it: ‘I’m my own manager’