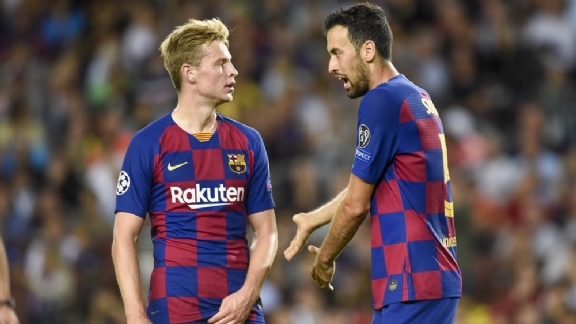 Frenkie de Jong can no longer make excuses after the international match, thinks Brand. The largest sports newspaper in Spain notes that after his arrival in Barcelona in mid-2019, the 23-year-old midfielder too often alternates good moments with lesser periods. It is believed that De Jong should rise this season as the leader of the midfield, especially after the arrival of Ronald Koeman.

“The midfielder must improve”, is the clear conclusion Brand Tuesday. Barcelona needs the best version of Frenkie de Jong this year after a debut season full of ups and downs, it sounds. “The former star of Ajax has to regain his form in order to redeem even some of the transfer fee of 75 plus 11 million euros. It was a strategic gamble: a player who will have to shape Barcelona’s midfield in the future, but up to that point. today has to put on the mat a performance that belongs to a player in his category. “

Koeman not satisfied with Frenkie de Jong: ‘I told him that’

Brand acknowledges that De Jong is self-critical, but also notes that the Orange International is still a long way from his status as a superstar among the team from Amsterdam. The good news for De Jong is the arrival of Koeman. The new trainer from Barcelona has worked with the midfielder at Orange. “The Catalan superpower has put the right man at the helm to improve the Dutchman’s game.”

“Koeman has changed the Barcelona system and opts for a 4-2-3-1 system. He therefore opts for two directors in the center of midfield (together with Sergio Busquets, ed.), Which in theory makes De Jong better at Barcelona is already reaping some of the benefits of Koeman’s decision if you compare the performance with last season, beating Villarreal (4-0) and Celta de Vigo (0-3) and only against Sevilla (1-1) there was no clean sheet. It remains to be seen whether the defensive stability, shaped by the presence of two directors, will hold up when larger opponents present themselves. “

“In addition to the arrival of Koeman, De Jong can also benefit from the presence of Alfred Schreuder. The assistant knows De Jong from their time together at Ajax. Schreuder was the right hand of Erik ten Hag, who for the time being has brought out the best of De Jong. The staff thus has a player in a key position in the house who knows exactly what kind of football is required. Rarely does a player have to deal with so many favorable conditions with regard to the staff. They know what level De Jong can reach and the staff also goes no longer accept an excuse. At the age of 23, he must now take a step forward and become the new midfield leader that Barcelona craves, “the paper concluded.

Do you agree with Marca’s analysis?

*The article has been translated based on the content of Source link by https://www.voetbalzone.nl/doc.asp?uid=378476
. If there is any problem regarding the content, copyright, please leave a report below the article. We will try to process as quickly as possible to protect the rights of the author. Thank you very much!

Mandelblit on Shai Nitzan’s conduct in the Harpaz affair: holding my...

PSV closes the season with financial profit, partly thanks to good...

Deinze finished with Seraing before half-time and climbs to fourth place...

INEOS is disappointed with shortening Giro stage: ‘We just wanted to...

T-Mobile starts a lawsuit for the construction of KPN network in...