A month and a half after the education system closed, the Corona Cabinet has approved the return of first- to fourth-grade students, and students will return to schools this coming Sunday. The Cabinet also approved three school days in grades 1-2. It will also be possible to partially resume daycare activities. The heads of the authorities in the country yesterday called on the Corona Cabinet and the Ministry of Education to give them powers that will allow them to manage the return to school schedule themselves, so that they can allow five school days for first-fourth grades.

Yesterday morning, the Minister of Education, Yoav Galant, had a zoom conversation with the heads of the local authorities and the local government, following the announcement by many of them that they intend to work for five school days a week for first and second grades and their call to allow the authorities to do so. In the conversation, Galant clarified that he does not support the independent conduct of the authorities, which in fact means that he is conducting himself contrary to a government decision. He called the move that the heads of the authorities intend to carry out, “unprecedented, unnecessary and wrong” and asked them to assist him in formulating another solution.

Meanwhile, the discussion in the cabinet yesterday provoked opposition regarding the after-school program in that during the day the children will be divided into capsules and the after-school programs will be mixed. The Prime Minister said: “At the moment what worries me is that the afternoons lower the effectiveness of the separation for us because they mix with a particular group. Do we have a way to reduce this mixing? “Dr. Sharon Elrai-Price added:” From a health point of view, it does not make sense to mix the capsules in the afternoons, the virus does not attack only in the morning. ” Minister Galant also commented: “I also said yesterday in a discussion with the local government and mayors, I think the cabinet does not properly assess the intensity of the frustration that exists on the ground.”

The chairman of the local government and the mayor of Modi’in Maccabim Reut, Haim Bibbs, said that the detached government is making inapplicable decisions. This is eye work. In the meantime, until the Ministry of Education decides how to deal with the “rebellion” of the authorities, the authorities have formulated an outline of five school days for first and second grades, in capsules.

The chairman of the Merhavim Regional Council and the chairman of the Center for Regional Councils, Shai Hagag, announced that he has spoken with all school principals in his area, so that the gates of schools for grades 1-4 can be opened, five days a week in capsules, utilizing the many natural areas in the area. . “Instead of the children coming to the schools, the schools will come to the localities,” he said.

In Rishon Lezion, they began recruiting personnel and resources and mapping study spaces, in order to allow students to study for five days, starting next week, for first-second students as well. At this stage, the municipality announced that it lacks 200 teaching staff for the purpose of implementing its outline and some will be recruited from the system itself.

Ron Huldai, Mayor of Tel Aviv-Yafo, said: “I want not to talk politics but to calm down. Look, Minister, we are at war. In war you have to understand and you know it better than I do, that we do not work according to the standards we worked in peacetime. The experience Giving what you need according to peacetime is the mistake at the base. That’s the real story. Do you talk about pedagogy? I understand that too. Why determine arbitrarily? Why not allow me to play with the data? I say, school principals know best to manage their students “. 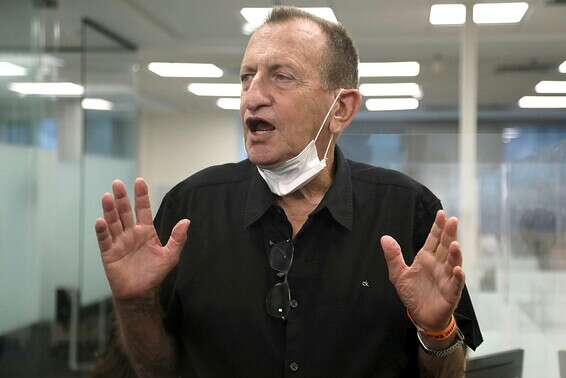 In Ramat Hasharon, they proposed a model that includes, among other things, a return to five five-hour study days in first-fourth grades, using the authority’s budgets, teaching only core subjects, education and sports time, reducing the number of teachers teaching in classrooms and hybrid separation within classrooms. Divide the class into two so that each capsule sits separately and the teacher teaches the two capsules together.

Givatayim Mayor Ran Konik said of the outline for returning to school and the municipality’s preparations: “The war is in full swing, the mayors and school principals at the front are cut off from the generals who are in the ‘pit’ (literally) “A-B will only learn alternately for three days, the so-called ‘kill’ the parents, but not with a blow, but bit by bit.”

The Herzliya Municipality has announced that it will return first- and second-graders to studies six days a week and in a capsule structure. Third- and sixth-graders will also study in capsules all week, but in practice each capsule will stay three days in school and three days away from home in interactive learning. In order for the teachers to be able to deliver the lesson online in a quality manner, the municipality intends in the coming days to install 170 smart cameras with an investment of NIS 765,000 in the classrooms. To maintain student privacy, the cameras will be aimed solely at the teacher and the classroom board.

A-D students in Holon return to school five days a week in a format that will be valid for two weeks. Classes in grades 1-2 will take place 5 days a week, with 3 days of them taking place in schools and the rest of the days in distance learning – divided into each class into two groups. Grades 3-4 will return to schools for 5 days a week and study in capsules of up to 18 students. Fifth- and sixth-grade students will continue to study remotely as this learning will be supported by social gatherings with teachers and education staff in groups of up to 15 students in the open space on the school grounds.

*The article has been translated based on the content of Source link by https://www.israelhayom.co.il/article/813943
. If there is any problem regarding the content, copyright, please leave a report below the article. We will try to process as quickly as possible to protect the rights of the author. Thank you very much!

The Or Akiva Municipality Corruption Affair: Significant Development in the Investigation

A train that lost control was saved thanks to a whale...

Average number of deaths per day doubles, number of patients in...

Facebook wants to transform WhatsApp into a shopping platform for SMEs

Simon Mignolet made a mark with one strong save at the...

“Killed and wounded by grenade impacts Kabul” – The Daily Standard

ABOUT US
News1 English is your news, entertainment, music fashion website. We provide you with the latest breaking news and videos straight from the entertainment industry.
Contact us: www.news1.ne[email protected]
FOLLOW US
© www.news1.news