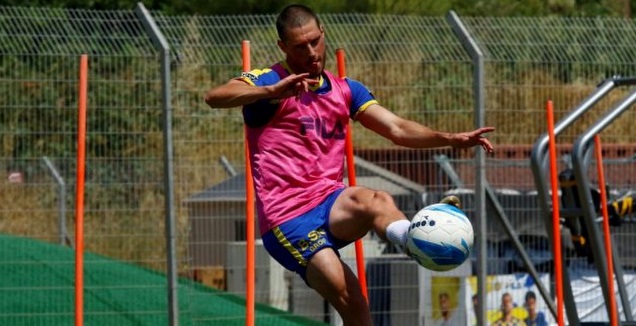 Almost two full years have passed since Orosh Nikolic signed his contract with Maccabi Tel Aviv and his statistics continue to indicate only 17 minutes of play, all while still holding the contract until May 2023. The injured Serb continues to be part of the Yellows when it comes to his contract, sitting within the salary budget. But in practice unable to play football while still dealing with his various injuries from the day he actually arrived from Dinamo Minsk on a free transfer, but with a long-term contract that turned out in retrospect to be the one that now sticks the professional team that did not bring him to Kiryat Shalom.

The mystery surrounding Nikolic, who to date has not issued an official explanation for the type of injury he is experiencing and does not explain why he is unable to return to fitness or when he will return at all, became even bigger yesterday (Tuesday) when the transfer window closed. Not at all registered as a player of Maccabi Tel Aviv in the Football Association and in fact, he is not part of its official staff for the current season, not in the league and consequently not in Europe. The yellow fans have already started to think that maybe the player has been released, but the story is different.

The reason for Nikolic’s non-registration starts already in the last top playoff. Following the injuries, Vladimir Ivitch asked to list Guyagon Farpa in the senior squad for the last 10 games of the season after the Corona break, the Football Association’s Supreme Court granted the request and on May 28, 2020, Nikolic was effectively removed from the Yellows’ lists. The new season has begun and in order to re-register as an active player, Maccabi Tel Aviv must enter up-to-date medical tests of the player. Emma? Due to his health condition, he cannot undergo medical tests and without such a form, he cannot re-register with the Football Association.

This delusional story around Nikolic, who arrived in Kiryat Shalom in December 2018 and has since managed to record only 17 minutes of play, when he spent the rest of the minutes injured and unable to return, does not seem near the end at this stage. In fact, the Serb is the penultimate player in Maccabi Tel Aviv who came from outside and actually won a long-term contract, followed by Andreas Janiotis in a three-year contract. Since then, every player who has signed, has been given a contract for only one season with extension options depending on a number of variables like amount of games and the like, and it seems that this is not just happening and the Yellows are not ready to get hurt again.

The brake that grew in Real – a worthy replacement for Amador?

Nikolic’s release is of course a complex matter, probably in the economic reality of the fair play, as he holds an agreement for another three years ahead and releasing such a contract is a very uncomplicated and even high expense. So he continues to be part of the team, hoping the moment will come when he will return to play, but if we go back to the things of Georgios Donis just about a month ago, it should not happen in the “next month or two”. One month has passed, it remains to be seen what the next month will bring and whether after that Nikolic will be able to undergo medical tests and return to the yellow squad.

Another issue that has occupied many yellow fans with the closing of the transfer window is the signing of Rowan Human, the 19-year-old South African midfielder. For some reason, the audience was sure that “the next Stephen Pinar” had arrived in Kiryat Shalom, and the fans did not understand why Maccabi Tel Aviv did not show the player after his signing, and why there is no “Welcome” video as received by Alexander Peshich and Luis Hernandez and basically all the players who signed Recent.

Who played her in the summer? And who screwed up?

The reason is very simple. Human, who signed a contract for only one season with an option to continue the contract, will be loaned to Betar Tel Aviv / Bat Yam and Maccabi Tel Aviv settled for two laconic lines at the end of the training they released yesterday. Human will have to prove himself in the National League before he even gets a chance to show if he is really the “South African of his age” down the road.

*The article has been translated based on the content of Source link by https://www.one.co.il/Article/20-21/1,1,3,60864/368568.html?ref=hp
. If there is any problem regarding the content, copyright, please leave a report below the article. We will try to process as quickly as possible to protect the rights of the author. Thank you very much!

OFFICIAL: Antwerp has a bite and gets a player – Voetbalnieuws

“Osher wants Nasreen to leave Eyal and he will manage”

Another Israeli and European youth record for Anastasia Gurbanko

Brussels will test tolls from next year and that will be...

Hart van Nederland can also be seen in the morning from...

“Insult to All Women”: A protest against the signing of Robinho