Senior officials in Israel and Bahrain have confirmed that the agreement will bring full peace between the countries and will include a series of political, diplomatic and economic agreements, as well as the establishment of embassies and an exchange of ambassadors.

The director general of the Ministry of Regional Cooperation, Dr. Yosef Dresnin, said ahead of takeoff back to Israel: “Together with the directors of the other ministries and other senior government officials, we held a meeting with our colleagues in Bahrain on the opening of a direct airline, joint investments in communications and joint projects in the fields of science and entrepreneurship.

The Israeli delegation, headed by the head of the National Security Council, Meir Ben-Shabbat, departed on El Al Flight 973 – named after Bahrain’s international dialing prefix. This was the first commercial flight from Israel to Manama. To meet with country officials regarding the actual implementation of the agreements between the countries.

Similar to the delegation that left for Abu Dhabi, this time too the members of the delegation flew in the Boeing 737 “Kiryat Gat” which is decorated with the flags of Bahrain, Israel and the United States. On the plane were US Treasury Secretary Steve Manuchin, and Avi Berkowitz, President Donald Trump’s Middle East envoy.

In a briefing to reporters during the flight, Manuchin said: “The White House and the US State Department are working on normalization agreements between Israel and other Arab countries, and we very much hope we can announce this soon.” In their conversation with reporters, Manuchin and Berkowitz stressed that they hope Trump will win the U.S. presidential election so we can continue to advance the Abrahamic agreements and further normalization relations. I hope that the process of normalization will not stop even if the president does not win. “Manuchin added:” It is a great honor to be a partner in such an important moment. I would like to thank Prime Minister Netanyahu and the King of Bahrain for their courageous step. “ 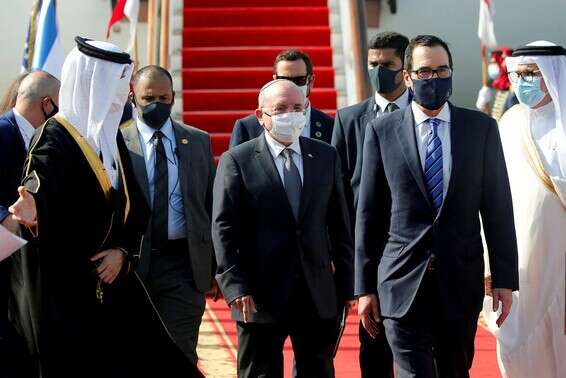 Upon landing the delegation, a working meeting was held between Ben Shabbat, Manuchin and Bahrain’s foreign minister, ‘Abd al-Latif a-Ziani. At the same time, there were further discussions in which the directors general of the Prime Minister’s Office, the Ministry of Foreign Affairs and the Ministry of Regional Cooperation took part in other issues concerning cooperation between the two countries. The Israeli and US delegations stated their readiness to advance and implement the agreements. .

The head of the Israeli National Security Council spoke after the landing, saying: “Israel is reaching out for real peace, we look forward to hosting you in Israel.” Ben Shabbat spoke to the media even before takeoff and said: We will hold discussions today with professional teams in working groups, on finance, trade and economics, tourism, aviation, culture, communications, agriculture and other topics. We are excited and together we will offer a prayer that will bring us to our desired district in peace. “

Towards signing the agreement: The Israeli-American delegation on the way to Bahrain // Photo: Daniel Sirioti

Ben-Shabbat added that “this is a big day when another chapter in peace becomes a reality. Only a few days ago, the Knesset of Israel approved the peace agreement with the United Arab Emirates, and here we are in Manama, on a direct commercial flight from Tel Aviv. “We thank King Ben-Khalifa and the Kingdom of Bahrain for their courage and the realization of the vision of peace between the peoples and citizens. Together, we will spread the light of peace.”

The US Ambassador to Israel, David Friedman, welcomed the move, saying: “We are here to take the next step in the Abrahamic Agreement. These countries were enemies, but as we know they were able to reconcile. This is another historic day out of many historic days the Trump administration has brought to the region. “. 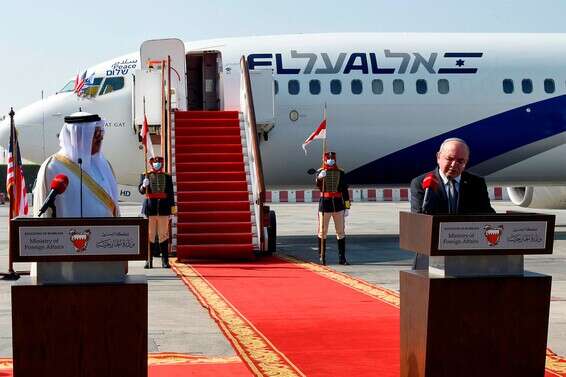 A-Ziani spoke after the delegations landed and said: “It is our whole honor to host you in the Kingdom of Bahrain, towards the next step in the Abrahamic Agreements, towards a warm and full peace between peoples and nations, which will bring peace, stability and prosperity to the whole region.” New”.

In his remarks, the Bahraini Foreign Minister stressed that for Bahrain “This is a historic visit and we say to Mr. Ben Shabbat, Mr. Steve Menuhin, Mr. Avi Berkowitz and the representatives of the Israeli and American delegations – Ahlen and Sahlan, welcome to the Kingdom of Bahrain. We thank President Trump and his government and Prime Minister Netanyahu “We are very excited about the brave and historic move.”

The Israeli delegation took off for Bahrain to promote the peace agreement // Photo: Lehi Krupnik

One of the exciting events of the visit to Bahrain, which lasted less than 10 hours, was a visit by Israeli journalists to the synagogue of the small Jewish community in Bahrain, located in the Old City of Manama. The Israeli journalists were greeted by the president of the Jewish community in Manama, Avraham (Ivy) Nono, and his niece, Huda Nono, who spoke about the way of life of the Jews in the country and the tolerant and kind treatment they received over the years from the Bahraini royal family.

“For us, this is the fulfillment of a dream,” Nono told Israel Today. “Until a few months ago, all our activity here was done on a low profile, and now we are all in the midst of a historic peace process. We could not have asked for more. I am a Jew, but first and foremost a loyal and proud citizen of the Bahrain. I call on Israelis to come to Manama, We will pray a minyan and not just on the main holidays. ” Nono was moved when Israeli journalists asked one of the representatives of the Trump administration, a religious Jew named Paul Packer, to hold an evening prayer in the synagogue in the presence of a quorum. “It was very exciting, I thank you all for the great honor you have given us,” Nono thanked reporters and prayer participants.

Earlier in the day, Israel Today reported that a senior source in the Bahraini Foreign Ministry said that Jerusalem and Washington had responded to Manama’s request to sign an interim agreement at this stage. “We are very excited about the arrival of the delegations from Israel and the United States and are preparing for an official and state reception. However, unlike the agreement signed between Israel and the United Arab Emirates, we prefer to take more measured steps and sign a framework agreement at this stage rather than a full peace agreement. “ 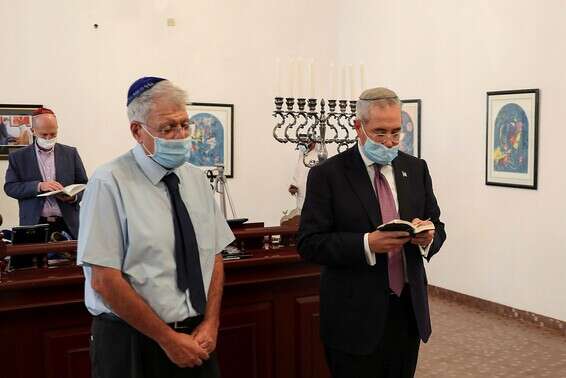 *The article has been translated based on the content of Source link by https://www.israelhayom.co.il/article/811203
. If there is any problem regarding the content, copyright, please leave a report below the article. We will try to process as quickly as possible to protect the rights of the author. Thank you very much!

The forecast: a drop in temperatures and local rain

Prime Minister for Traders: “Asks you to cooperate in a few days”

The cabinet has decided: the synagogues will open this coming Sunday, the shops will wait another week

If the walls could talk

The Israeli experimenters who will receive the vaccine against Corona are ready: …

Malen shoots himself to the European top

Headless French teacher had been under attack from the Muslim community...

First lady can be a secret weapon for (re) election, but...

Adir Getz and Ben Zini – who will love more than...

“You are more likely to get infected with Covid-19 in the...