FC Barcelona lost 1-0 to Getafe on Saturday evening, but afterwards it was mainly about a meeting between trainers Ronald Koeman and José Bordalás. The Dutchman complained to his Spanish colleague about the behavior of midfielder Allan Nyom.

Immediately after the final whistle in the Coliseum Alfonso Pérez, Koeman contacted Bordalás and not only to congratulate him on the victory. “I told him that Nyom shouted very ugly things to me two or three times, which I will not repeat. I cannot accept that. It is a lack of respect,” Koeman said after the press conference.

Koeman told Bordalás that he had to address Nyom about his behavior and the Getafe coach will actually talk to the 32-year-old Cameroonian.

“I told Koeman that I am going to talk to Nyom because there is no place in our team for insults,” said Bordalás. “But I doubt he really said what Koeman heard. I know Nyom as a competitive guy who lives for competitions, but also as a respectful person.” 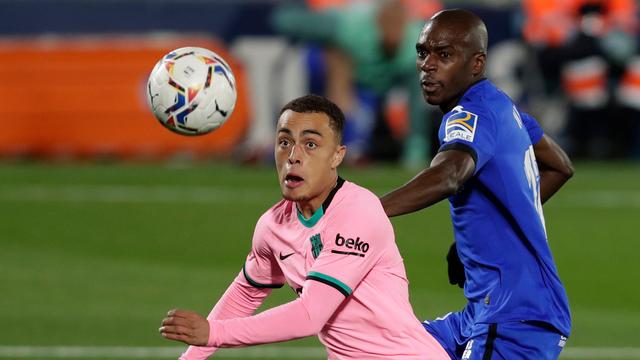 ‘Don’t talk about the arbitration’

Barcelona lost at Getafe to a penalty kick from Jaime Mata, caused by Frenkie de Jong ten minutes after the break. Koeman’s team, with Sergiño Dest in the starting line-up, was unable to play the defensively strong Getafe. “We didn’t get our rhythm,” Koeman saw.

In addition, Getafe and especially Nyom played hard, including an elbow strike against Lionel Messi. An alleged foul in the penalty area on Ansu Fati also went unpunished, Koeman did not want to say too much about it.

“I don’t like to talk about the abritrage. Anyone who has seen the games and all the fouls can draw their own conclusions.”

Because of the defeat, Barcelona is in the middle bracket in La Liga with seven points from four games, although the Catalan club has yet to catch up. Real Madrid, which lost 0-1 to Cádiz on Saturday, is in the lead with ten points from five matches.

View the results, the program and the position in La Liga

*The article has been translated based on the content of Source link by https://www.nu.nl/sport/6084682/koeman-spreekt-getafe-trainer-aan-op-gebrek-aan-respect-bij-nyom.html
. If there is any problem regarding the content, copyright, please leave a report below the article. We will try to process as quickly as possible to protect the rights of the author. Thank you very much!

Maccabi Haifa fans are expected to show support in training

Live | Vaccine vulnerable ‘can be done before Christmas’ | Inland

What about cleaning help, car inspection, under 12s and Allerhe …

‘Without new support it is game over’: three victims about the new lockdown measures

The lockdown of the last chance: “Otherwise the doors of …

Belgium in partial lockdown, one ‘hug contact’ per family | NOW

Dor Jan scored in the win over Porto

VTM viewers hard for Julie Van den Steen: “This is so...

Suriname can no longer pay interest on loan | Financial

The captain of the boys’ team began to be tested at...

After PSV – Vitesse, emotional Schmidt again lashes out at ‘arrogant’...

The Corona game in Italy? “Genoa shares 8 patients with...

Rival in invitation: 0: 3 to Dortmund over Schalke