Just before the Premier League returns to activity, it is difficult to ignore the last round of infections that attacked the Israeli national team players, which caused quite a bit of frustration and confusion among those who contracted the virus: Eran Zehavi, Hatem Alhamid, Louis Taha, two staff members and Nir Bitton. On the one hand, the players are tested the day before a game, but on the other hand it does not really help.

“It is impossible to control it. Here at Celtic we have been in a regime for four months since I returned from Israel,” he said Nir Biton For the sports news edition. “No families, no restaurants, no friends, almost no leisure life, people are not allowed to stay at home. We take care of ourselves.”

Compared to the exemplary order in his team, the brakeman talked about how problematic the issue is at the national team level: “It’s bad luck, you go to the national team and suddenly there is a sick player and you find out after a few days, and there will probably be more patients. They’s one big bullshit. How Eran said, ‘It’s an ass cover, getting out of hand.’ He’s negative and he’s negative, 95 percent of the players are likely to be negative, but suddenly two or three days after the game there will be some positives. plunder”.

Despite the claims, Biton has no solution to the problematic reality: “There is no solution. The only solution is to cancel the teams and it will not happen. Once you get to the teams, if there is a team that suddenly has some positives for a few days, sometimes you should not take a risk. “You have to keep the players in an environment that is comfortable and sterile, and if that means not inviting players from a team that had an outburst – then that’s what it should be.” 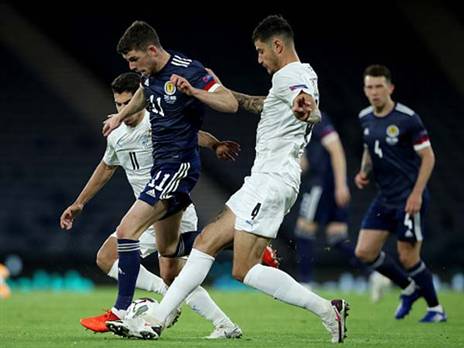 Bitton vs. Scotland. Seeks not to underestimate the disease (GETTYIMAGES)

Bitton also spoke about the disease itself and confirmed – even young athletes can endure: “I went through the hard days. Tomorrow I get out of isolation and I am already dying to get back to routine. Before the disease I underestimated it and underestimated it, but it was not pleasant. “Headaches, muscles – I could not stand and I had to sit, at such a level. I am still without taste and smell and hope it will come back soon. Not easy days, but the hardships are behind us.”

“You do not know what you are heading towards, everyone knows how the disease starts and not how it ends. I think if it affected me, young and athletic guy, I do not know how it affects older people. We see deaths. I ask people – watch out. “On your own, stay in the houses and take care of the relatives – this is not an easy disease.”

*The article has been translated based on the content of Source link by https://www.sport5.co.il/articles.aspx?FolderID=285&docID=351957
. If there is any problem regarding the content, copyright, please leave a report below the article. We will try to process as quickly as possible to protect the rights of the author. Thank you very much!

Nadal is the greatest athlete of all time

Respect them: Get to know Franzwarush

Captains from the first national sound the alarm: “Something has to change” | Belgian Football

‘Club Brugge gave up the arrival of midfielder and trusts Vormer...

Another loss to Himki before Maccabi

Van Ranst: ‘If the figures do not drop, we only have...