Steven Berghuis is very disappointed by the disappointing game of Feyenoord in the derby against Sparta Rotterdam. The captain and his team did not get further than a disappointing 1-1 draw in De Kuip on Sunday.

“The first half was still okay, although we were sloppy in important situations in which we could have created opportunities”, Berghuis said shortly after the game. FOX Sports.

“In the second half it became a fighting match, Sparta did well. We went along with it. We didn’t create anything at all. Sparta kept it close with three men in the center in the back and we played them into the card.”

Berghuis has already scored six goals this season, but Feyenoord could not prevent Sparta from losing points. The team from Rotterdam came to just one shot on goal at home in the entire match.

“We could have been 2-0 or 3-0 ahead at half time and I should have scored twice”, said 29-year-old Berghuis. “I didn’t have a chance in the second half. I’m not satisfied with that.” 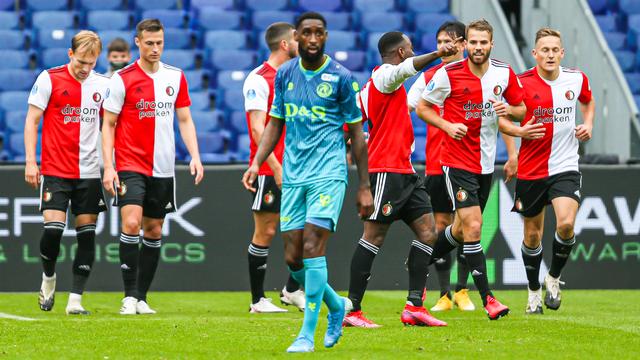 ‘I want to see progress’

Trainer Dick Advocaat was of course disappointed with his team’s game. “It was difficult. A messy game with a lot of loss of the ball, we could not play the ball to each other three times”, said Advocaat, who was nevertheless not dissatisfied with a point.

The experienced trainer realizes that his team got away well, when Deroy Duarte missed a big opportunity on behalf of Sparta just before time. “That means I can live with 1-1. It was an excellent save for our goalkeeper Justin Bijlow.”

The draw was the second loss of points this season for Feyenoord, although the team has still not lost in the Eredivisie since the appointment of Advocaat in October 2019. “Just because we don’t lose doesn’t mean we win every game,” smiled Advocaat.

“But I hope to see progress. The second half against ADO Den Haag was nice, against Willem II was also good and the training last week was good, but today it didn’t work out. Unfortunately, that can happen once.”

View the stand in the Eredivisie

*The article has been translated based on the content of Source link by https://www.nu.nl/voetbal/6084741/balende-berghuis-feyenoord-had-geen-antwoord-op-vechtvoetbal-sparta.html
. If there is any problem regarding the content, copyright, please leave a report below the article. We will try to process as quickly as possible to protect the rights of the author. Thank you very much!

Laughing Lawyer drops Feyenoord hint: “Then you already know something more, so”

Oussama Tannane keeps struggling Vitesse in the wake of Ajax

Freedom Fighter: A winning goal for Kabani in extra time

Abuse of the elderly: A foreign caregiver was arrested on suspicion...

“Illegal and immoral. Dan Einbinder is not a brat” – Sports5

Separatist group Polisario breaks with Morocco after 29 years of armistice...

The Tax and Customs Administration has known for 3 years that...

Brussels will test tolls from next year and that will be...