American Airlines and United Airlines, two of the largest airlines in the US, announced that they will begin taking more than 32,000 employees on unpaid leave today (Thursday), after they did not receive another emergency aid package from the federal government. % Of the labor force of the two companies before the plague.

In the United States, they plan to send 19,000 workers to the Squadron, including 1,600 pilots. At United, the Squadron will affect 13,000 workers, but not pilots who reached an agreement with management earlier this week.

The American companies have asked the administration for an additional $ 25 billion in salary funding so they can keep jobs for another 6 months. The original rescue package, whose conditions forbade the removal of workers to the IDF, expired yesterday at midnight.

The Reuters news agency reports that the companies informed the workers that the rescue service will be canceled as soon as a rescue agreement is reached.

Tens of thousands of other employees at these companies and other companies, including Delta Airlines and Southwest Airlines, have agreed to go on long vacations in an attempt to alleviate the companies facing the consequences of the corona plague that has severely damaged flights around the world.

Yesterday, Finance Minister Stephen Manushin announced that talks with House Speaker Nancy Pelosi on an aid agreement have progressed, but no agreement has yet been reached. 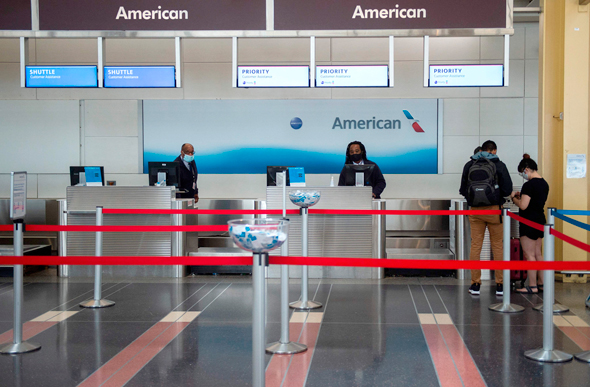 In a memorandum sent to employees, American Airlines CEO Doug Parker explained that Finance Minister Manushin had informed him that he was continuing negotiations with Pelosi on a rescue package that would include an extension of aid to the airlines. In Manushin’s estimation. It will be possible to reach a new agreement within a few days. “Unfortunately, there is no guarantee that these efforts will mature into an agreement,” Parker added.

“Tens of thousands of vital workers in the aviation industry will be without work or health insurance and tens of thousands more will stop receiving wages,” said Sarah Nelson, president of the union representing the flight attendants. Nelson therefore called on lawmakers to reach an agreement.

American airlines operate about half of the flights they operated last year and suffer a 68% drop in the number of passengers. According to estimates released yesterday, the impact of the corona plague on the aviation industry could lead to a cut of 46 million jobs worldwide.

*The article has been translated based on the content of Source link by https://www.calcalist.co.il/world/articles/0,7340,L-3852053,00.html
. If there is any problem regarding the content, copyright, please leave a report below the article. We will try to process as quickly as possible to protect the rights of the author. Thank you very much!

Great concerns about emergency care in the region | 1Limburg

Real estate throws a party, tobacco is the cigar

Dutch naval vessel intercepts more than 2,000 kilos of drugs in the Caribbean | NOW

No 250 visitors for AFAS Live and Ziggo Dome: ‘This is very sour’

Ophir Zilbiger has been appointed head of cyber at BDO International

Eight cases of Corona in the Titans, which suspended the team’s...

Relance plan of 4.3 billion euros must Flanders from coronac …...

‘Ghent will make this decision about Vanhaezebrouck after exit in Champions...

‘United goes full for the most expensive transfer of 2020’