The number of apartments approved this year in the planning institutions is expected to be only 68,144,000, the lowest in six years, and reflects a drop of about 50% compared to last year, where 140,608 apartments were approved, and of 55% compared to 2018, when 151,163 were approved, according to information received To “Calcalist”. If this trend does not change soon, in the coming years there will be a decrease in the number of new apartments and an increase in prices.

Dalit Zilber, Director General of the Planning Administration. Her pessimistic forecast in April turned out to be too optimistic Photo: Inbal Marmari

By the end of September, all planning institutions had approved plans to build 51,000 apartments, an average rate of about 5,600 apartments per month. At this rate, by the end of the year, plans will be approved for the construction of 68,000 apartments. But this calculation does not take into account the closure imposed in September. In the first closure in March-April, the planning institutions barely convened and there was a drop in the number of plans approved. Once again, despite better preparedness by digital means, the shutdown of the economy is expected to lead to a decline in the pace of discussions and approval of plans.

The corona combined with the political crisis has led to a particularly sharp drop in the number of apartments approved by the VOTAML so far. % Of the target set for it by the government. At the time it seemed that this was a pessimistic forecast, now it turns out that Zilber was actually optimistic, very optimistic: so far the WTO has approved 8,000 apartments.

An examination of the construction plans according to their geographical location shows that precisely in the areas of demand in the Central District, Tel Aviv and Jerusalem, a serious problem is developing. According to the strategic housing plan, approved by the government in 2017, every year until 2020, the planning institutions must approve 15,500 apartments in the Tel Aviv area, and 27,500 apartments in the central area. In Tel Aviv, the state has been far from the target for several years: last year, 6,600 apartments were approved by the Tel Aviv and Votamal District Committees, and this year 4,500 apartments have been approved in the meantime. And so far this year, about 12,000 apartments have been approved. The number of dwellings in the plans approved in the Jerusalem District is also very far from the target: in 2019, only 5,600 dwellings were approved, which is 48% of the target in the strategic plan, and so far this year about 4,500 dwellings have been approved.

Examining the data by committees, it turns out that the root of the problem is an almost complete stagnation of the WTO. Last year, 65,000 apartments were approved, almost half of the apartments in plans approved by all planning institutions combined. In 2018, the committee approved 60,000 apartments, with six committees The districts together approved plans to build about 90,000 apartments, but since the beginning of the year this committee has been in a deep stalemate, undergoing a process of change, which is unlikely to increase the number of apartments in the plans it approves this year and in the coming years.

The decrease in the number of apartments approved this year by the district committees and the WTMAL was caused, among other things, by the emergency regulations of the Corona crisis. In March-April, the Planning Administration worked with 30% of the workforce. “The slowdown is continuing even now, and it is not clear when exactly and in what way it will start operating in full. 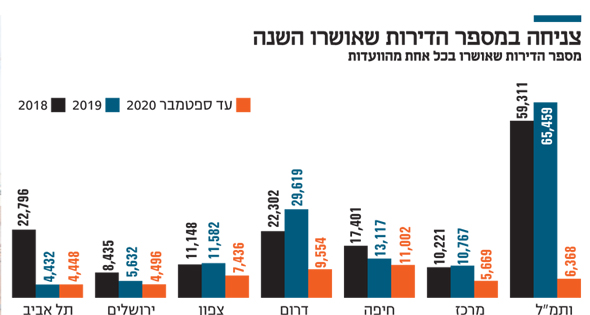 The main problem is that the law intended to regulate the committee’s activities has not been enacted, and it operates under a temporary provision approved in 2014 and expired in June this year. An amendment to the law that extends the activities of the committee was carefully drafted by the Ministry of the Interior, and placed on the table of the Ministerial Committee for Legislation about three months ago. However, this committee did not convene at all during this period due to a dispute between Blue and White and the Likud. The committee is headed by Justice Minister Avi Nissenkorn, but in the spirit of the private government, his replacement is Minister Dudi Amsalem, who does not allow the committee to convene. The crisis erupted after the end of the 100 days in which the parties agreed that there would be no senior appointments in the public service. It is estimated that Amsalem is preventing the convening of the committee as a means of pressuring blue-and-whites on the issue of appointments. Last week, Bnei Gantz stated that he had initiated a move to elect a state attorney. This is without agreement with the Likud, so it seems that the dispute has not been resolved and the committee will not convene.

Until the new OTMAL law is approved by the government and later in the Knesset, the OTMAL can only discuss plans that have already been deposited for objections. There are about 30 such plans in the pipeline, and if the discussions on them are completed before the law is approved, the WTO will be almost completely closed.

But even after the law is approved, the committee is expected to approve plans in the coming years with far fewer apartments than we are used to – because of the change in the nature of its activities. At the beginning of its path, it focused on plans for vacant land on which tens of thousands of apartments could be built. In 2019, it began to focus on urban renewal plans and plans in Arab localities – plans in built-up areas where the number of apartments is small and require prolonged treatment due to multiple barriers and disputes – and the new law reinforces this trend.

The Interior Ministry said: “We hope that the Wethmal Law will be approved as soon as possible. The Government and the Ministerial Committee on Legislative Affairs are currently focusing on discussions only on the corona crisis, and do not promote a series of various legislative moves, including the extension of the Wattamal Law. Last year, the committee exceptionally approved a high number of apartments in plans in vacant areas. “This amount does not reliably represent the current VOTAL work in which emphasis is placed on complex plans in densely populated areas and Arab society localities.

*The article has been translated based on the content of Source link by https://www.calcalist.co.il/real_estate/articles/0,7340,L-3854193,00.html
. If there is any problem regarding the content, copyright, please leave a report below the article. We will try to process as quickly as possible to protect the rights of the author. Thank you very much!

In the kitchen with Pascal: the orange cake of the late mother Esther

An agreement was reached between the foreign ministries: Israelis will be able to fly to the Emirates in the coming days

What will the malls pilot look like? All details – Channel 20

Lapid: Next week we will raise a proposal to dissolve the Knesset, even if Blue and White does not support it

The education system will be fully opened in yellow and green cities. Minister Galant: “We will increase the scope of tests for students...

Insolvency: A 41% increase in the number of applications this year to open proceedings

Talib attacked Netanyahu and caused a stir on the Internet

Barrage at Ashdod and the Shephelah, Iron Dome intercepted – security...

LIVE | Someone dies from corona every 16 seconds, reports...

Carey: Honda to quit is a matter of money