After about two weeks ago, the Fox Group announced that it would open the stock stores of the Greek jumbo brand in Israel, the backlash comes. Today, Chuck Bass Ltd., the management company that operates the Jumbo Stock chain, owned by the founder and CEO Roy Vanunu, issued an objection to the application for registration of a trademark “JUMBO”. This, before the Registrar of Trademarks.

The petition reads: “The interest of this opposition is in the attempt of the Greek foreign corporation to register a trademark in Israel that is identified and recognized with the opposition, the JUMBO Group. The opposition is a successful Israeli company, which has established huge investments in nationwide stores “A great reputation under the JUMBO mark and its derivatives. In an attempt to enter the Israeli market, the foreign applicant is a member of the FOX Group, which has no foothold in this field, and submitted the JUMBO mark in its name, taking advantage of the great reputation of Israel’s opposition in the industry.”

It is also written: “Registering the mark in the applicant’s name will mislead consumers into thinking that there is a connection between the applicant and the opposing network in Israel, and not so. The opponent’s JUMBO network is an example of Israeli entrepreneurship, local economic and business activity, which created the” blue and white “brand. Hundreds of Israeli workers who support thousands of their families. In the current challenging economic period of the Corona Age, care must be taken not to rob the opposing enterprise or to train the blatant attempt of a foreign competitor, In the course of unfair competition and misleading consumers. “

It is further written “The opponent is the owner of a chain of home product stores in various categories, which operates under the trademark” JUMBO “and its derivatives.

The opposing chain of stores was established in 2015, and with great effort reached a nationwide distribution, so that today the chain has 11 branches throughout Israel, which operate under the opposing brand: “JUMBO”, “JUMBO Stock”, “JUMBO Street”, “JUMBO Online” and ” JUMBO Maximum quality at a minimum price. ” The opponent will open another store by the end of the year as well as 5 more stores during 2021. In addition, the opponent operates a sales network of products sold in its chain of stores also online (online), which began operating in 2019. The online sales network operates under the sign “JUMBO” and – “JUMBO Online”. This is a leading and very unique marketing and sales system in the field. The opponent’s online store, which operates under the brand, is a pioneer, and in fact the only one in Israel in the field of stock and department store products, and allows delivery service to the customer’s home and within 5 business days only.

The opponent has submitted her designed marks for registration and she has applications for registration of trademarks dated 9.9.2020. During its years of operation, the opposing brand has invested millions of shekels in advertising and marketing services, both on digital platforms and social networks and through traditional means of advertising such as the press and television. 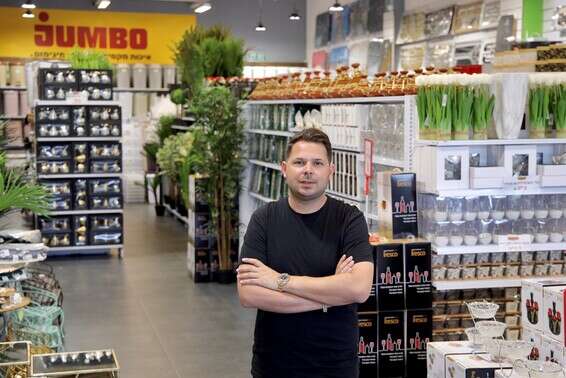 As a result of the opponent’s excellent services in operating a chain of quality home goods stores, at equal prices per capita nationwide and as a result of its large investments in advertising, the opponent’s income from providing its services under the trademark reaches tens of millions of shekels annually.

The desired mark – JUMBO is designed phonetically identical to the sign that opposes in its dominant component, JUMBO, in that the two marks are spelled in the same way, drive in the same way and therefore sound the same. Also in terms of the appearance of the signs, there is a great visual resemblance between the requested sign and the opposing sign, as in both the prominent component is the word JUMBO which is written, as stated, in the same way in both signs.

In addition, the requested mark was submitted for registration in relation to a list of services almost identical to the services of the opponent provided in Israel under the mark, and in respect of which the applicant’s requests were submitted. Thus, it must further be assumed that the consumer audience to which the applicant addresses is the same as the consumer audience of the respondent, who consume its services provided under the trademark.

It should be noted that through the new network, the Fox Group is trying to compete with the successful Max Stock network by opening the Greek and popular jumbo network among Israelis. The company has entered into an agreement under which Jumbo will receive the right to establish and operate jumbo stores which was founded in 1986 and is a leading retail company in Greece. It is a public company, traded on the Greek stock exchange and has a value of about 2.15 billion euros.

Jumbo’s annual sales turnover is about 812 million euros. Jumbo sells a wide range of products from several categories, including toys, clothing, baby accessories, housewares, office supplies and more, meaning that Max Stock “plays” in those categories and is therefore a competition for the successful chain in Israel.

Jumbo operates about 80 stores in Greece, Bulgaria, Cyprus, Romania and other European countries and employs about 7,000 people. The target audience of jumbo stores includes a variety of products for women, men and children of all ages.

The chain is considered an attractive chain for Israelis for whom Greece is considered a leading destination and it offers a large variety of products at affordable and attractive prices. According to industry sources, prices are expected to be similar to Greece. No response was received from the Fox Group.

*The article has been translated based on the content of Source link by https://www.israelhayom.co.il/article/805357
. If there is any problem regarding the content, copyright, please leave a report below the article. We will try to process as quickly as possible to protect the rights of the author. Thank you very much!

A fire is spreading in Wadi Ara: Residents of the area...

After many soft Brexit deadlines, the real one is now approaching

‘The experiment with Frenkie de Jong has failed’

Seven suspects detained on board oil tanker off British coast