Last Tuesday, Laurens De Plus already participated in the Belgian championship, tomorrow he will start in the Flèche Wallonne and on Sunday Liège-Bastogne-Liège is on the agenda. After a season full of misery, the Jumbo-Visma climber is back. And he is again available to the press. “Maybe I waited too long to talk,” it sounds.

Why have you maintained that silence for so long, Laurens?
“A decision that I made myself in consultation with my entourage. I wanted to make a full recovery first and only talk to you once I got back into competition. But in retrospect, that may not have been the best option, because I got more and more questions. ”

At least it fed the innuendo. You would no longer line up Jumbo-Visma because you are leaving for INEOS Grenadiers.
“I know. I also understand that train of thought, but with this one, those innuendo can be left out once and for all. My absence had nothing to do with my departure. I was injured and had to convalesce. There was nothing more to it. But again, I understand that there were questions. Especially because of that combination of circumstances. But the Tour de France was on. I reasoned that no one would worry about Laurens De Plus. ”

How did you experience the Tour de France?
“Of course I was initially disappointed that I was not there. But I still sympathized with the boys. I have been on an internship with them several times. I gave them success and was also disappointed when things went wrong in the final weekend. I would be a very bad person if I had experienced it differently. Incidentally, I had a great period at Jumbo-Visma and I hope to end it well. ” 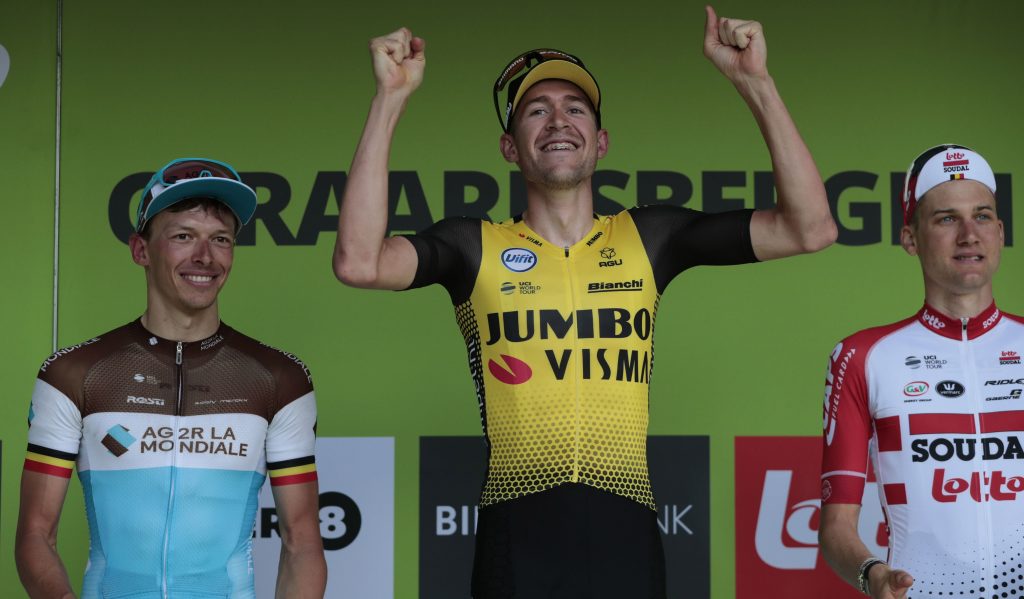 Can you explain to us exactly what your injury entailed?
“I don’t think I should put my complete medical file on the table. But briefly, I was struggling with stomach problems in January. Those were resolved, but then corona reared its head. It wasn’t until June that I started having problems with the hip. An inflammation due to overload. Rest and specific exercises were required to recover. Unfortunately, both the Tirreno and the Giro came too early. Now I feel ready for it. ”

You started at the BK. Was that okay?
“I suffered, had to gasp hard. In a WorldTour race, controlled driving is done in the initial phase and it all happens in the final. From the outset, people cycle hard at a BK. That had a heavy impact. But it was extra training after my internship in Italy. I have improved my condition and I feel ready to assist our leaders (Tom Dumoulin and Primoz Roglic, ed.) In the Flèche Wallonne and Liège-Bastogne-Liège. But of course I will not be able to ride the final yet. That is for later. “

What does your further program look like?
“An evaluation will follow after Liège. But I am on the longlist for the Vuelta. I am hungry, the fire is burning to get to the start. At least if Covid-19 doesn’t put any stick in the wheels. Vuelta participation would be nice to end this strange season. A season that I will not soon forget. ”

A moment about your transfer to INEOS Grenadiers. Are we talking about an offer you can’t refuse?
“No! I get the cliché, but it’s not right. I was in a luxury position and had several offers. But after a good chat with Dave Brailsford, I chose INEOS. Brailsford wants to go back to basics: a good group of young riders, to see who are the better ones and deserve the selection. I am not afraid of the competition. On the contrary, this is a way of working in which I do my best. “

*The article has been translated based on the content of Source link by https://www.wielerflits.be/nieuws/laurens-de-plus-doorbreekt-stilzwijgen-ik-begrijp-de-insinuaties-maar-ze-zijn-fout/
. If there is any problem regarding the content, copyright, please leave a report below the article. We will try to process as quickly as possible to protect the rights of the author. Thank you very much!

Cohen has been suspended, Caspi will not play against Milan either

Round 7 games in the National Football Cup

Matchday: an important day for Ajax in the Champions League

Jos Verstappen gets behind the wheel again: ‘I’m going to test something, something can come out just like that’

Maccabi Netanya says no to violence against women

Maccabi Tel Aviv against Villarreal, Donis’ press conference and the lineup is estimated

Alba: ‘Dest is of a very high level’

Coronavirus: Figures incomplete due to malfunction, demonstration in The Hague

‘Idrissi transfer confirmed, no replacement from outside’

Albrandswaards Dagblad | ‘Apps for scanning a suspicious spot not...

Alimony agreement revoked: The girls are used to cosmetic treatments and...

Vincent Kompany has a hard time after Club-RSCA: “That’s never a...

City Drama: An employee’s life was saved thanks to a defibrillator