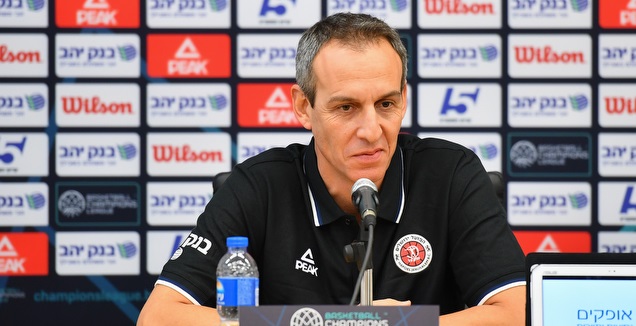 Hapoel Jerusalem is preparing for its climactic moment in recent years when coach Oded Katash addressed the team’s preparations at a press conference held in Athens, Greece ahead of the opening of the FIFA Champions League Final 8 tomorrow in the quarterfinals tomorrow (Wednesday) at 18:30 against Spanish San Pablo Burgos. Also, injured captain Jacoben Brown also addressed the preparations and injury he suffered.

Oded Katash He opened his remarks by referring to the preparations for the Final 8 tournament: “For me it is always fun to come to Greece, especially to Athens. I am glad that we have an opportunity to finish the season on the floor, for us at Hapoel Jerusalem it was important to finish last season. I thank the Champions League for the opportunity, it was important to us despite all the problems we went through along the way with the Corona crisis. “

Preparations for the game against Burgos: “In terms of scouting we had an advantage because we saw Burgos most games since they started the season before us, on the other hand we were the last league to play and we had a very challenging summer, the management made a big effort to build a good team, we are missing two-three weeks of preparation. We did our best, but I do not think there are big favorites ahead of the tournament since this is the season opener, we will have to be mentally prepared and hope for a good day. We know we will have to present our best basketball to beat a tough team like Burgos. ”

The signing of Nikos Papas: “Regarding Papas, we know Nikos and know he is a high level player. He trains at a high level and is very experienced. Unfortunately, the circumstances that led us to Papas’ signing were due to injury, so like I said, the management made a big effort this summer with the whole Corona situation, it was a short summer and we had to get ready for Final 8, so we reacted very quickly after the injury of one of our senior players. Like Papas, it’s great for us. “

The state of the group and the integration of Papas: “Obviously we will play better in another two or three months, but we still have to do our best to build the best team possible in this short period of time. It’s the same with Papas, we’re lucky he’s with us, but I can ‘t appreciate how he’s going to help us in that short time, he’s only trained with us four or five times, but that’s the best we could have done in that amount of time, That he is with us. “

Absence of the audience: “We miss our fans very personally, but I think sports in general miss the fans. This is good news that in some European countries the crowd, or part of it, is returning to the pitches, in football, in basketball, any sport, this is good and happy news. I hope that soon in Israel we will be able to see an audience on the pitches, we are facing some difficulties at the moment in Israel and the situation is not the best, but I want to be optimistic and think that in six to eight weeks we will be able to play in front of our audience again. I think, as a past player, as a current coach and as a big sports fan, I think that is the main reason to do sports. When we go on the field we have to win our fans, they are in our hearts and I am sure they encourage us from home and want us to do our best to win, we have to remember that ”.

BROWN: Didn’t go down because of the injury, didn’t think about not coming

Captain Hapoel Jerusalem, Jacoben Brown, Who was injured and unfit for the tournament, commented on the team’s condition and preparations for the Final 8: “We arrived on Saturday, relaxed and started preparing with the new guys in the team. It’s just fun, we enjoy it and want to give a good performance in the hope of coming out with the victory. “

Past injury: “I am not fit to play in the tournament, I am probably not fit for the next two months. But my mom told me to stay positive and I am a positive person in my nature, I do not go down and I am here for my teammates and that is all that matters to me right now, to be positive and push the guys beyond their boundaries. We had a short preparation and I felt good, but things like that happen in basketball and you should not go down and I need to stay motivated to support my friends because that is what is important right now. It sucks that I can not play, but that’s the reality for me right now. “

The fact that he arrived with the team despite the injury: “It never crossed my mind not to come here, I want to support my teammates. We had a wonderful trip last season and we just want the new guys to understand how important it is to us, the players who were here last season and I’m sure now it’s very important to them too. They can enjoy the moment, I am here at every step of the way, even if it takes me two or three months to return, I am here and still part of the team. “

Jerusalem’s attack: “Our coach, Oded Katash, was a player and he has a perception of rhythmic play and let us play freely. Everyone has a role in the team and he is trying to find point guards to lead the team. Our goal is to share the ball, because when we do it beautiful things happen, it’s the only thing Oded preaches to us, to play together and stay together and that’s the key, to be all of us together and not be afraid to take shots, just play basketball. That’s why we’re here to have fun together. ”

Burgos’ strengths: “They play together, they are a team that is difficult to keep up with and they have good players, they know how to play basketball. We must not let them warm up, because when that happens it is very difficult in front of them. We need to limit them and make it harder for them to get into the game and adapt themselves to us. Hopefully they will play into our hands, because otherwise it will be a long night. I’m talking about what I remember of them from last season, because to be honest because of my injury I did not get to see Burgos this season because I was not part of the preparations and I was just watching from the sidelines with my friends. “Burgos is a great team, we have to fight and not let their players get in the way, we remember what happened in the game where they defeated us.”

*The article has been translated based on the content of Source link by https://www.one.co.il/Article/368031.html
. If there is any problem regarding the content, copyright, please leave a report below the article. We will try to process as quickly as possible to protect the rights of the author. Thank you very much!

He called and said Bijlow was injured. I immediately said: pack your bags’

Idrissi may secretly hope: ‘He is an option, we will determine that on Tuesday’

Ajax hopes for ‘higher transfer fee’ for Tagliafico: ‘It was already coming’

Betar Jerusalem: This is not how we will win a championship, after the 1: 1 against Maccabi Netanya

Jans discovers a weak spot at PSV: ‘I have seen it before, for example against PAOK’

Caspi returned to play after about a year. Watch his performance

English fans welcome back to the stadium, but not at Liverpool or Man United

League of Nations: Belgium and Italy in the semi-finals

In recent years, the number of pancreatic cancer cases has increased...

Ronald Koeman after defeat: ‘We gave them a great gift’ |...

Palestinian female terrorist felt “like a bride on her wedding day”

The director Voorschotje.nl still has to pay the AFM fine

Bel20 is probably taking a step back

Survey conducted by Mercer, one of the leading investment management bodies...

“We shot ourselves in the foot”: Maccabi Tel Aviv is trying...