The chefs and restaurant owners thought it was behind them, but it happened again – a closure and order to close the restaurants, and this time in a more severe way, one that also includes a ban on selling food in self-collection, a decision many define as puzzling and hurting many businesses even more.

Among the most prominent of the new “trends” we saw quite a few restaurants around the country that began to share spaces, that is, two restaurants in one restaurant, also, ghost kitchens and cooperative kitchens around the country are slowly emerging, and given the economic and health situation, many restaurateurs will choose In one of these two ways, all the more so in light of the sanitary and constitutional problems that may arise when it comes to working in the home kitchen.

Until all this happens, we will discuss another segment of the population of food people who have also been harmed – the “small” independents. The private chefs who used to entertain, entertain and cook for dozens of people, people who mustered up courage and opened a new place after the closure because they thought there would be no one else and people who made a change of mind in order to try and save what was left.

Very few optimistic things happened to restaurateurs in the first wave, one of which is going to mass funding campaigns and through it also creating a real community of fans and diners. Millions of shekels have been raised in the first wave of crowdfunding sites by many restaurants, cafes and a variety of small and large businesses, and it seems that this time too they will choose quite a bit this way, because if it works, why not?

“Throughout the crisis, and with the damage to small businesses that unfortunately deepens with the current closure, Dastart provides a platform and solution to create cash flow for businesses even when they are closed,” says Maayan Meltzer, founder and CEO of the Head Start Group. For dozens of businesses and freelancers across the country, and in recent days we are seeing a significant increase in business recruitment coming up. We are proud to be a platform and solution for small and self-employed businesses affected by the crisis It’s together “

“Lemon is made from lemonade”, you are probably, and rightly so, tired of hearing this sentence already, but these are exactly the three words that will sum up the next phenomenon. Owners of banquet halls, huge spaces or even large restaurants, which utilize the place for purposes different from the original ones, this is a phenomenon that is in a diaper relationship but is expected to grow and develop as the closure and complex economic situation worsens. 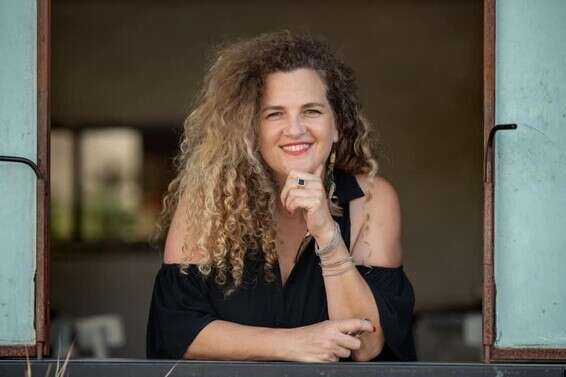 For the past five years, Mia Wade has been the owner of Wide Open, a boutique event complex designed by an architect that hosts both business events and birthdays, weddings and bar mitzvahs. Like many spaces that had to deal with a minority of events and gatherings, Wade also converted the space to one that hosts mostly limited culinary events, but beyond that, and quite spontaneously, decided to take advantage of the fact that her chef has a special understanding of Japanese food .

At first it was spontaneous, but with the compliments came the appetite, and now Wade has launched a crowdfunding campaign that sells exactly the same trays and will help her, and the business that is her life project, survive these difficult days. “The sushi trays were just a creative idea,” she says, “but a lot of compliments came so we decided to continue with it at least until I could bring back the events.”

“In March I had 54 events canceled, in June I returned a small part of them, but the closure finally broke my spirit and completely crushed me. However, I am still optimistic and hope I can continue to make people happy, both in their homes and in my place.”

Cook from the kitchen

Chef Dor Strykowski (Striki), a member of the “Mahane Yehuda” group and the reality show “Chef’s Games”, had to deal with a restaurant that closed and after quite some time of thinking at home, launched “The Jerusalemite”, which is actually a double or group brunch package made by To your house.

“I decided to start creating this whole thing thanks to my friend, food blogger Ines Yanai, who suggested to me that if I’ve been sitting at home for so long, I should do something with myself,” says Stricky. “My restaurant has closed and there is currently no work in restaurants, but I still did not open it as something that would be an economic solution for me but as a desire to get out of the routine and do what I love while I am stuck at home.” 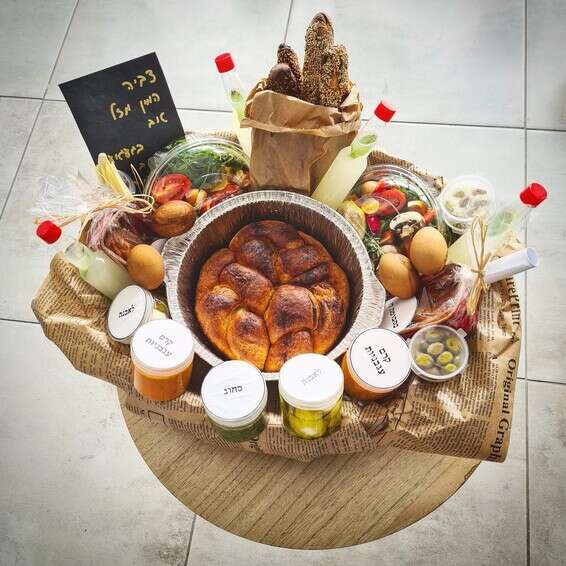 “However, I soon found out that I really like it, much more than I thought,” she continues. “The feedback that comes to me is very flattering, people love it. My expectation now is to open a small place, a deli style, that people can come, assemble for themselves a ‘Jerusalemite’ basket and take for a picnic at sea or in the park.”

The need for creativity

In the current wave we have also seen quite a few cases of bad luck, which becomes much more significant as it joins the plethora of circumstances that have occurred in recent months. However, quite a few people have succeeded, or are on their way to turning this misfortune into success, from a slightly different angle, even if it is a gamble that may not pay off. Among the restaurants or chains you can find quite a few examples like Benedict, who turned the lemon into lemonade and launched a particularly tempting “picnic on the terrace” package, but what do the private chefs who can not be hosted, or worse, freelancers who have started a business between closures?

Dotan Zeber, a resident of Moshav Kmehin at the entrance to Nitzana, owned a small hummus shop in his place of residence, and after he wanted to grow up, opened a larger one on the main street of Yeruham. “I came out of a kind of innocence to understand the reality of life,” he says. “The opening was planned in advance after the closure and fortunately, due to the closed sky and an excellent tourism campaign that was here in the city, we had a lively traffic that never looked like in the summer months in Yeruham and in June-July and August tens of thousands of Israelis came here. 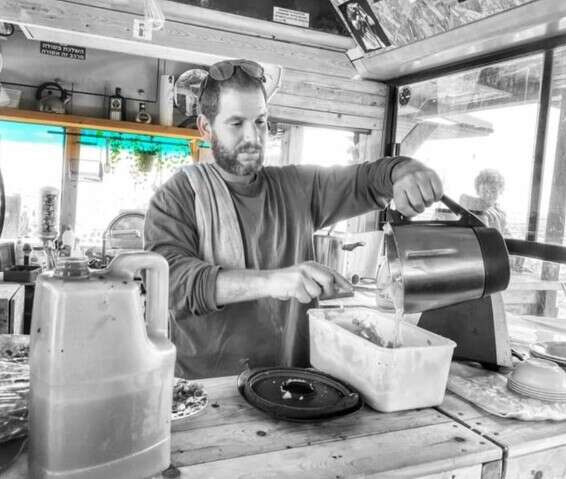 We were a real surprise to the Israeli traveler who was exposed to everything the town has to offer. We started September relatively stable, but then news of infections all over the country began and it immediately gave its signals. When the talk of the second closure began, we realized that we would have to face an even new and more challenging reality than has been the case so far.

Since we live and work in an area where deliveries are not very common, we had to make a difficult decision and last Friday we closed the business and took all the workers to the Knesset. I currently have no livelihood but luckily I have a background in gardening and in recent days And “perusing” what I can to bring some money home and feed the kids. ”

“I have no horizon for what will happen, I really hope everything goes back to normal and we can go back to hummus at the end of the closure. That’s all I have, I have no other alternative. I have invested a lot there and I am not in a place where I can start a new business now. We reduce expenses, reduce everything we can, take a deep breath and wait for it to pass. ”

Despite the difficulty, Ziver is still trying to bring his good news to the residents of the area, and these days he is working on a digital platform for centralized and concentrated orders by residential areas, all as stated, provided that they allow deliveries. Until then he will probably continue to work in the avocado orchard in my family. 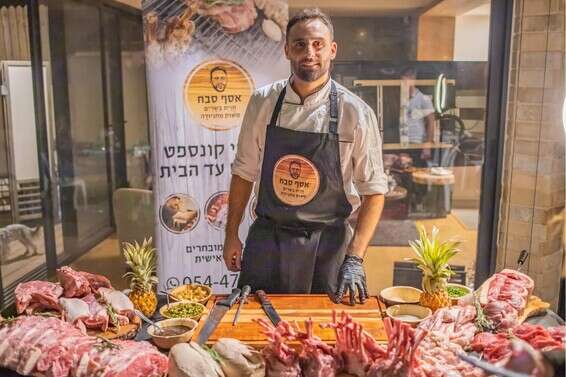 Chef Assaf Sabah, a grill man who is used to holding private events for dozens of people, also found a creative solution that could save the day, but better yet, help him stay in touch with his audience. “I started the business right before the Corona,” he says. “I am a grill chef who comes to the house for large and small events with the best and highest quality pieces of meat that I personally choose from the Mahane Yehuda market in Jerusalem. Everything was wonderful. There was great interest and paragon. My concept was successful and then came the first closure and I realized we had to rethink They probably won’t be back anytime soon. ”

I thought about what to do and came up with an idea to combine the service I provide with the closure restrictions, and in the current period I am already implementing the idea – a “Sabah to the house” kit. The highest quality meat, which I use for events, personal order for family or couple, for independent preparation “The kit includes a branded bag, chunks of personal choice and at a high level, winning recipes, special seasoning and of course a telephone explanation with tips for successful grilling.”

*The article has been translated based on the content of Source link by https://www.israelhayom.co.il/article/804619
. If there is any problem regarding the content, copyright, please leave a report below the article. We will try to process as quickly as possible to protect the rights of the author. Thank you very much!

Six-day fireworks riot in Geitenkamp: ‘We don’t like rules in this neighborhood anyway’ | Riot Goat Camp

Why there are so many pregnant couples in Buy Without Watching

“Joshuawa’s daily preoccupation with him hates the players”

“The Israeli economy will not return to full activity before July”

Fagron is looking for new takeover targets in Israel

Robinho: May go to jail Sport 1

Dowsett is the boss of fellow refugees and gives his team...

Orange wins, but misses the Nations League final round

With an army of doctors and endless tests: Trump once again...