Less than two weeks after making history in Paris in its first Tour de France, Israel’s start-up nation in Sicily will jump into the second most important race in the world on Saturday – the Giro d’Italia – with the stated goal of winning its first Grand Tour victory.

Israeli champion Guy Sagiv, who only two years ago was the first Israeli to smash the glass ceiling when he jumped into the historic Giro in Jerusalem and successfully finished 3 weeks later in Rome – made it clear that this time it is a completely different challenge for him and the team. “I do not come this time to take a ride just to finish,” the Israeli made it clear that this was his (and the team’s) first time competing as an Israeli champion on one of the biggest stages in the world. “I believe I ride better, with more experience and also with confidence elsewhere. My ambition is to help the team win here and get a chance to escape. It is going to be much more challenging and much harder than the historic Giro that the whole country will never forget. “.

Startup Nation this time puts a different and even daring and revolutionary composition for its third Giro d’Italia – with a bet on the whole box office to go for a victory in the sprint. So she sends the 21-stage Giro the hardest stages including at least 6 distinct ascents – the vehicle that aims to try to win the relatively flat sections. She has placed two sprinters in her team – the Frenchman Rudy Barbier, who has already signed two victories this season, and the Italian Davida Chimulai, who always culminates in the Giro. All the other riders in the team including Sagiv are aiming to help them win. “We come focused,” Sagiv explained, “and I believe we have the tools to go for this victory.”

Start-up Nation does put experienced riders here for this purpose: the British Alex Dowst, the Austrian Matthias Brandella, the German Rick Zabel, the Canadian Alex Catford and Guy Sagiv – together will form the “train” of the start-up. In the ascent sections, it will be the Spanish climber Danny Navarro who will be the leading rider. “In the mountain sections we will be less in the game,” Sagiv admitted. “But in the rest we will fight forever in escapes and sprints.” Another card of the team will be the counter-clockwise sections including the opening section on Saturday in Palermo. Dowst (British Champion) and Brandella (Austrian Champion) belong to the world top in the field. 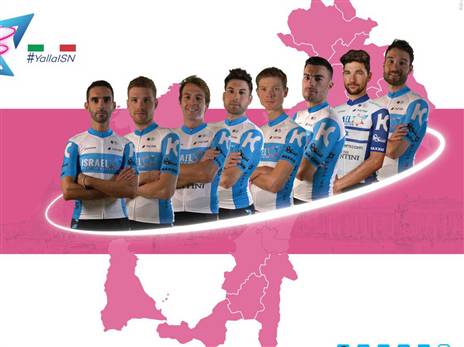 Builds on the Sprinters, Startup Nation

The owner of the team, Sylvan Adams, who intends to accompany the team to the Giro as well after the tremendous experience in the Tour de France and the exciting end on the Elysee boulevard with Guy Niv – the first Israeli to do so. “Of course, the gyro in Israel will always be remembered by all of us as a source of immense pride – and the status that marked the great turn for the group. I hope and believe we can achieve another historic milestone here. ‘

The gyro will take off on Saturday on the island of Sicily, traverse Italy for 3,450 kilometers and climb to the summit of the Dolomites before reaching its end on October 25 in central Milan. Like the Tour de France, the entire column will be run under a strict “bubble” regime to protect the riders and crew from the corona virus, which of course threatens to disrupt and cancel the column. Since the end of the column, the situation in Europe has only been deteriorating in the face of the second corona wave sweeping the continent. “Hopefully everyone will follow all the rules so that we can reach Milan healthy and intact,” Sagiv said.

The Giro d’Italia, which will take place for the first time ever in October (originally scheduled to take off in early May) due to the Corona crisis, will probably take place under more stormy weather. It will be televised in Israel and around the world in front of hundreds of millions.

*The article has been translated based on the content of Source link by https://www.sport5.co.il/articles.aspx?FolderID=2911&docID=350718
. If there is any problem regarding the content, copyright, please leave a report below the article. We will try to process as quickly as possible to protect the rights of the author. Thank you very much!

Marc van der Linden fears: ‘There will come a day when...

Spokesman: Kaminitz Law will be partially frozen – legal and criminal...

Magician and escape specialist James Randi passed away on …

KLM agreement with cabin and ground on pay sacrifice, no deal...

No more amateur football in 2020: ‘Current corona measures needed until...