Instead of the four-species market, where the potential for infection is high – dozens of trucks for the purchase of the four species will travel around the city’s neighborhoods ahead of Sukkot

By: “The whole city” system

The four species market is entering the neighborhoods: In order to prevent the spread of the corona, the Jerusalem municipality will deploy dozens of trucks throughout the city’s neighborhoods in favor of purchasing the four species ahead of Sukkot.

This is an initiative of Mayor Moshe Leon, in which every trader who wants to sell the four species in the neighborhoods by truck only, will receive full support from the municipality, close supervision and coordination with the police.

“In the run-up to Sukkot, at the initiative of Jerusalem Mayor Moshe Leon, dozens of trucks will be deployed throughout Jerusalem’s neighborhoods,” the municipality said. “Species using mobile trucks that will pass between the neighborhoods and the streets, and assist them in issuing the permits and accompanying the municipality’s inspection department. We emphasize: the sale will only be possible in coordination with the municipal inspection.”

Residents of Jerusalem – Do you have an urgent complaint or something that is important to deal with? Contact the red mail of “The whole city”[email protected] 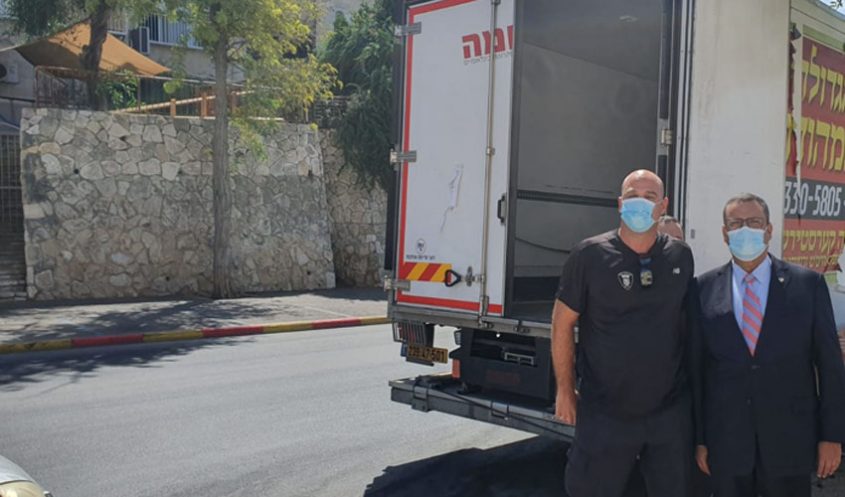 Mayor Moshe Leon next to one of the trucks that will sell the four species (Photo: City Spokeswoman)

The municipality emphasizes that “the initiative was born to allow the trucks to be deployed as widely as possible and to significantly reduce the crowds in the four-species stores.”

Mayor Leon: “The only option to reduce life-threatening gatherings is through a wide decentralization of points of sale. Jerusalem: Happy holiday. “

Merchants who wish to operate trucks in coordination with the inspection team can contact the directors of the community administrators in Jerusalem or the inspection department of the Jerusalem Municipality at 0542340008 and receive the service.

Want to stay up to date with all the hot news in Jerusalem?

Download the “All the City of Jerusalem” app on Android

Download the “All the City of Jerusalem” app on your iPhone

*The article has been translated based on the content of Source link by https://www.kolhair.co.il/jerusalem-news/139647/
. If there is any problem regarding the content, copyright, please leave a report below the article. We will try to process as quickly as possible to protect the rights of the author. Thank you very much!

Exciting: The optician was informed of the customer’s death and returned the money

The friends of the late Lehi Ben-Bessa lit candles in his memory, his father wrote: …

Why was the evidentiary phase of the Netanyahu trial postponed? Questions and Answers

Ganz threatens: “If there seems to be no budget for 2021 – we will disperse the Knesset”

The former Chief Rabbi of the United Kingdom has passed away

Half of doctors afraid to take home coronavirus

Prince Abdul Azim of Brunei passed away at the age of...

Trump returned from the hospital to the Corona-stricken White House

Will Zahavi pass Spiegler in the Kingdom of Gates?