Tomorrow it will happen, after a seven-month wait European European fans will return to smile with the return of the Euroleague League. In honor of the festive event, the Eurohops website publishes a list of the 100 best players this season, and although the first 20 have not yet been revealed, we will take a look at the standouts on the list and also check where the Maccabi Tel Aviv players are located. Newcomer Ante Žižić has received a lot of respect and although in the last three seasons in the NBA has not impressed too much he is very high in the rankings and has overtaken some senior players from the continent.

Let’s start with two exes of the Blue Yellows, Michael Roll and Norris Cole, who are ranked 91st and 87th respectively. Remember, Roll will open his second season at Olympia Milan while the Guard will try to rebuild his career at Wheelerban after joining it from Monaco. Zack Lydie from Milan, who played for Hapoel Gilboa / Galil just three seasons ago, is in 79th place.

Yannis Sapropoulos’ first representative is Elijah Bryant, who was ranked 69th and Swingman will try to continue his improvement graph this season since arriving in Israel two years ago. Maccabi’s next player in the ranking is Tyler Dorsey (68), who is only one place ahead of him. Another player who has done a thing or two at Nokia Hall is Pierre Jackson (55) of Panathinaikos who was ahead of some senior players on the list like Gabriel Dek (62) from Real Madrid and Rodrigo Boboa (61) from Andolo Zero.

By the time we get to the top 50 we can already see some heavy guns like Trey Tompkins (50) from Real Madrid, Alex Abrins (47) from Barcelona, ​​Rudy Fernandez (45) from Real Madrid. One of the best players in the Euroleague in recent years, Sergio Yul from Real Madrid, has continued to drop in the rankings this season as well as being in 39th place after being in 21st place last year. Derrick Williams (37) Molensia also slipped 15 places. The Yellows’ next player is Žižić (32), who will try to justify his high salary and the big hype surrounding his signing.

Further down the list and in a very respectable place can be found Othello Hunter who was ranked 22nd. The center of Maccabi Tel Aviv, Vasilis Spanoulis from Olympiacos (30), Luigi Datoma from Milan (26) and Chris Singleton Manadolo (24). Kyle Haynes (Milan) was ahead of Hunter, before the rest of the list was published. 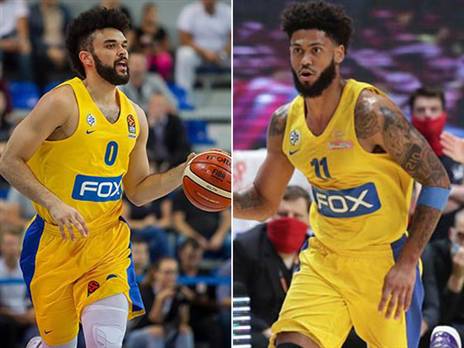 Will Maccabi players prove themselves this year as well? (Alan Shiver)

*The article has been translated based on the content of Source link by https://www.sport5.co.il/articles.aspx?FolderID=405&docID=350665
. If there is any problem regarding the content, copyright, please leave a report below the article. We will try to process as quickly as possible to protect the rights of the author. Thank you very much!

Celebration in Ashdod – Dean David: “The face is already on Sakhnin on Saturday”

Othello Hunter: “We do not listen to the coach”

The potential has erupted, the experience stands out: MS Ashdod celebrates a place at the top

Lawyer critical of Senesi: ‘It should have been an ABC’

Diego Maradona: If between Leo Messi and him in Argentina you will be laughed in the face

EU supports the Netherlands: Moscow must continue to negotiate MH17

Coronavirus on the rise in Premier League | Sport

Corona: Peak of sick and dead in Ukraine, Russia and the...

In August, the number of real estate transactions increased by 8%...

MS Fonds is looking for collectors in Aalsmeer

Surer lashes out at Albon: “I see him rather as a...

The “Tourist Islands” law was finally approved by the plenum, the...