Sara Errani has no good word for Kiki Bertens. The Italian lost on Wednesday in a bizarre match against De Wateringse, who suffered from physical discomfort in the grueling third set and left the track in a wheelchair after her victory.

“I don’t like when someone is acting,” Errani grumbled after her defeat at the press conference. “She left the job in a wheelchair and now she’s fine and eating in the restaurant. I just saw her.”

Bertens won in a match of more than three hours and no less than 24 breaks with 7-6 (5), 3-6 and 9-7 against the Roland Garros finalist of 2012. In the deciding set, the Dutchman was injured in the second part and she was treated by a physiotherapist.

In the twelfth game, Bertens survived a match point, after which she broke back a little later and decided the match at her fourth match point. Crying with emotion and pain, the number eight in the world left the track in a wheelchair. Her coach Elise Tamaëla announced an hour later that her pupil is doing better again. ‘I didn’t scold her’

Errani, however, was furious with Bertens and thought that the South Hollandian was acting. The global number 150, who had a lot of trouble throwing the ball at her service during the match, left the track swearing and ignored her opponent.

“I don’t like games like that,” she said. “Pretending to be injured and running on the track during the points. She ran like never before and made me furious. She can play great even without this kind of thing. And then I get accused of bad behavior afterwards because I don’t see her. congratulate? “

Errani can also be fined for Italian swear words when leaving the job. “I didn’t scold her. In Italian you say something like that in general,” she stated. 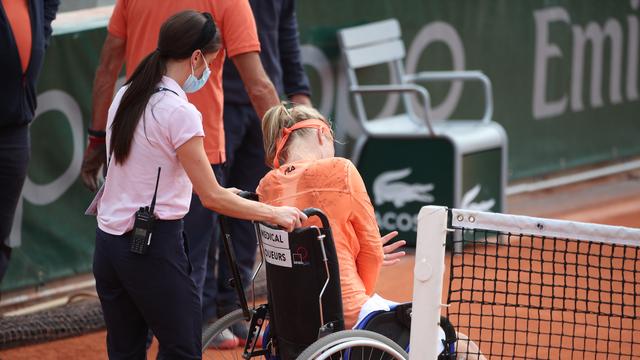 Bertens: ‘She better look at herself’

Bertens took the allegations of her opponent adult. “She can say what she wants, but it is not nice to hear of course,” she said at her own press conference. “I get it because she’s frustrated that she lost side.”

“But she better look at what she could have done better herself than complain about me,” she continued. “When she just saw me in the treatment room, she said nothing. I sat there for 45 minutes.”

Bertens said that it was very difficult after her victory over Errani. “After the match it was really hell. I had no control over my body at all. I had cramps everywhere.”

*The article has been translated based on the content of Source link by https://www.nu.nl/tennis/6080883/errani-woedend-op-bertens-houd-er-niet-van-als-iemand-toneelspeelt.html
. If there is any problem regarding the content, copyright, please leave a report below the article. We will try to process as quickly as possible to protect the rights of the author. Thank you very much!

A terrorist attack was thwarted by border fighters in the Jerusalem area, the terrorist was neutralized

Big hat-trick for Oda Marshall, 0: 4 to Hadera over Sakhnin

Suspect of fatal collision in Wijchen is 18-year-old man

RIP PLUISJE: entire (football) world pays tribute to one of the best football players of all time – football news

K&K: ‘With Klaassen, Gravenberch does not have time to relax’

Hundreds of thousands of private data on the street after hack...

Hospitals in The Hague must postpone regular treatments by 40 percent...