Dacia presents a completely new generation of Sandero in one fell swoop, and that includes not only a completely revised Stepway version, but also a Logan modified to the tiniest nut. It goes without saying that the youngest Sandero and Logan are more modern than their predecessors, but never before have the two been so current. Where the outgoing Sandero and Logan have to do with the relatively simple and aging M0 platform, the new generation is on Renault’s brand-new CMF-B platform. Indeed, the modular base that you find under the Renault Clio, Captur and Nissan Juke.

After the generation change, both the new Sandero and Logan are a bit bigger than its predecessor. In fact, the platform change gives the Sandero an even larger wheelbase than the Renault Clio. The Sandero is 4.06 meters long and has a wheelbase of 2.60 meters. That is 1.5 centimeters more than its predecessor and even a thick 2 centimeters more than with the Clio. The wheelbase of the Logan Sedan is identical to that of the Sandero. The Logan Sedan is again not coming to the Netherlands, while the MCV even disappears completely from the scene. Those extra centimeters are reflected throughout the interior, although they really have a positive effect on the space in the back. Rear passengers have 4.2 centimeters more legroom in the new Sandero and Logan than in previous generations. The Romanians have also expanded slightly in width, which provides 0.8 centimeters of extra shoulder room in the back. With a volume of 328 liters, the luggage compartment of the Sandero and Sandero Stepway is a total of 8 liters larger than that of their predecessors. The Logan Sedan can carry even more luggage with 528 liters.

The Sandero and Logan are new down to the smallest nut, yet recognizable as Dacia. The latest models are topped with a fresh and for the brand quite distinct new design language. In the revised, noticeably flatter headlamps, the daytime running lights are modeled in Y-shape, a design element that, according to Dacia, returns to other models. In the rear lights we encounter a similar light signature. The horizontal line of the LED lighting optically blends into the chrome strips placed above the grille. Because the track width of the Sandero and Logan has been increased by 1.5 centimeters on both sides at the front and rear, the wheels fill the wheel arches more nicely than with the current models. The wheel arches themselves are slightly turned on by the somewhat curved body panels. All in all, the sides of the Sandero and Logan are more dynamically lined than before. The ground clearance is unchanged at 13.3 centimeters.

Dacia has also replaced the simple, up-hinged door handles for more modern looking ones where you pull the handle towards you. In addition, the antenna moves from the front of the roof to the rear. That roof is a centimeter lower at the rear than with the current models. Also nice: from now on you will no longer find a visible tailgate release on the tailgate. The release is now neatly concealed in the part where you put your fingers to open the flap.

In keeping with the best of tradition, the Sandero Stepway is the adventurously dressed version of the Sandero, which with its increased ground clearance and bumper work with black accents and silver skid plates looks as if it feels at home off the asphalt. Of course, black plastic edges around the wheel arches cannot be missed. The word Stepway can be read under the grille. Striking is the fact that Dacia gives the Sandero Stepway its own bonnet, with more voluptuous shapes than those of the regular Sandero. The ground clearance of the Stepway is 17.4 centimeters, making it 4.1 centimeters larger. The Stepway is standard on 16-inch ‘Flexwheels’, steel copies that closely resemble alloy wheels. Alloy is on the option list. The Stepway concept is further reflected in the presence of roof rails, although Dacia is giving the new Stepway completely new aluminum models with a modular construction. You can click on various parts, including cross beams. Simple, but effective. Inside, the model hardly differs from the regular Sandero. It is only orange stitching on the furniture and door panels that, together with Stepway logos, should provide a little more zest for life.

In addition to the exterior, the interior of the Dacia’s has also been completely overhauled. In the new, significantly more modern interior, the optional infotainment system is more or less loosely placed on the dashboard. It is in a nicer place than in the outgoing ones where it is even placed under the ventilation grilles. With a diameter of 8 inches, the screen is a full inch larger than before. Dacia has three options in terms of infotainment. The basic versions get Media Control, a cover where you can click your smartphone. This is followed by Media Display, the infotainment system with an 8-inch screen. Media Nav is the more comprehensive version of that system that not only has a navigation function, but also offers Apple CarPlay and Android Auto support via Bluetooth. 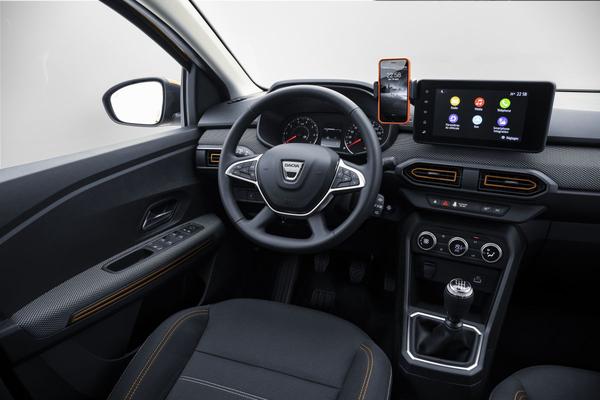 It is striking that Dacia sticks to a somewhat clumsy placement of the USB port. Currently it is located at the top edge of the infotainment screen. In the new Dacia’s, the USB port is given a place between the optional infotainment screen and the instruments. The clock shop has been completely changed and now consists of a simple display with the rev counter on the left and the speedometer on the right. Dacia sticks to the rotary knobs for operating the climate control, although they are, as in the Duster and Renault Clio, equipped with a digital display in the knobs themselves. Nice detail: almost the entire width of the dashboard is covered with a fabric-finished strip that divides it into two layers. Good news for those who find it difficult to find a comfortable seating position in the current Sandero and Logan: from now on the steering wheel can also be adjusted in depth. The driver’s seat is also adjustable in height. The Dacias also benefit from the arrival of an electronic handbrake. The storage space in the interior has increased by 2.5 liters to 21 liters. A center armrest with storage box is new.

Passive and active safety systems are introduced. Six airbags are now standard and Romanians have the mandatory SOS button ex factory. A speed limiter is also standard. Depending on the version selected, systems such as Emergency Brake Assist, Blind Spot Detection, front and rear parking sensors and Hill Start Assist are also available. Another interesting option: the Sandero and Logan are for the first time available with an electrically opening sliding / tilting roof.

On the international engine list, Dacia puts a 65 hp naturally aspirated 1.0 three-cylinder petrol engine called SCe 65. That power source is not coming to the Netherlands. The TCe 90 does appear on the Dutch price list, a three-cylinder 90 hp that is available with a manual six-speed gearbox as well as with a CVT automatic transmission. The more powerful TCe 100, 115 and 130 are therefore reserved for the Duster and the Lodgy. The new Sandero and Logan do benefit from the new TCe 100 Eco-G engine, a 100 hp blown 1.0 three-cylinder that, in addition to petrol, also likes LPG. Those LPG versions have a 50 liter gas tank with a usable capacity of 40 liters. That gas tank has no consequences for the luggage compartment. In combination with the 50-liter petrol tank, the Sandero and Logan have a range of 1,300 kilometers on autogas.

Does the modern CMF-B platform also mean that the new Sandero and Logan will be electrified, like the Clio and the Captur? No. Dacia is of the opinion that the above-mentioned engines are still the best price-related to the wishes of the customer. According to Dacia, they would not be willing to spend more money for a plug-in car from the brand.

Since the re-introduction of Dacia in the Netherlands, it has enticed about 52,500 people to buy one of the Romanian models. With more than 20,000 units sold, the Logan has proven to be the most popular type in our country, followed by the Sandero and the Duster, of which more than 17,000 and nearly 11,000 units respectively left the showroom. Perhaps the ultimate prize pack is the Lodgy. The MPV, available with both five and seven seats, is by far the cheapest ballroom on wheels on the Dutch market. Since 2012, almost 3,000 copies have been sold. Just under 1,000 copies of the Dokker have been sold to date.

Especially with the Sandero, Dacia scores well in Europe. Since 2007, Dacia has sold 2.1 million units on our continent. No less than 1.3 million of these, about 65 percent, were designed as Stepway. On top of that are the Sandero numbers sold as Renault in South America and Russia.

*The article has been translated based on the content of Source link by https://www.autoweek.nl/autonieuws/artikel/dacia-sandero-en-logan-compleet-in-het-nieuw/
. If there is any problem regarding the content, copyright, please leave a report below the article. We will try to process as quickly as possible to protect the rights of the author. Thank you very much!

222% jump in profit in the electrical consumer goods sector

Ghost of Tsushima will be playable on PS5 at 60fps via...

“My Hugo” is the winning play at the Haifa International Festival...

‘Online sales Black Friday will go through the roof this year’...

“Give us a big winner, and no hassle”: after two weeks...