The British Emergency Medical Service is considering the use of a hovercraft based on tiny jet engines to assist and rescue hikers in hard-to-reach areas in the mountains and remote places. According to reports in the British media, the initiative is a collaboration between the Great North Air Ambulance Service, which is an ambulance service in helicopters, and the company that developed the suit – Gravity Industries.

The request came from the ambulance service, or more accurately from its operations manager, Andy Mauson. The British non-profit is currently operating three ambulance helicopters for the northern regions of England. The demand was to develop a means that would allow paramedics to quickly reach casualties even in mountainous areas. Rescuing hikers stranded on a cliff or in an area where a helicopter cannot be landed may require the rescuers on foot – a process that can take a long time. On the other hand, the hover suit allows the paramedic to “skip” the target in a maximum of 90 seconds.

The suit was unveiled in a purpose-built display, with its operator lightly leaping up a rocky hill at impressive speed. According to the ambulance service, a foot arrival of the distance, which is swallowed in a few tens of seconds in a hover suit, can reach half an hour if the terrain conditions are bad. The suit itself is not a novelty, and hover suits have been around since the 1970s. But in recent years instead of basing them on rockets, the miniaturization of jet engines and the development of safety measures have accelerated their use. 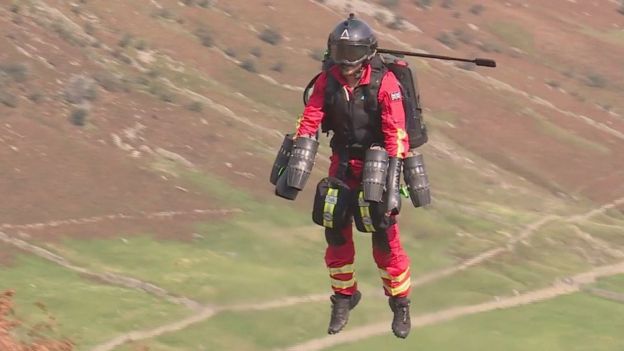 The suit will meanwhile be used for rescue in the mountainous areas of northern England and Scotland. According to Mauson, it could be used about a dozen times a month. The suit itself was demonstrated by the founder of Gravity Industries, the company that developed it. It consists of two engines that the “pilot” assembles by himself. In the back, another motor is installed in a kind of enclosure that is connected to the body by a vest. The motors on the hands make it possible to make the necessary directional corrections, and the rear motor is only designed to provide the hover.

This is not the company’s first hover suit, which started operating as early as 2017 thanks to the vision of its founder Richard Browning. One of them was in the form of the superhero Iron Man.

*The article has been translated based on the content of Source link by https://www.calcalist.co.il/internet/articles/0,7340,L-3851788,00.html
. If there is any problem regarding the content, copyright, please leave a report below the article. We will try to process as quickly as possible to protect the rights of the author. Thank you very much!

Omar Adam celebrated this weekend with Martin Grix in Dubai

“Turn off the cameras and stab her calmly”

A new double bridge in Ayalon will bypass traffic jams, but not everyone will be able to travel on it

This morning: Nati Hadad will be released from prison

Ministry of Health reports: jump in the number of positive corona tests

This morning: Nati Hadad will be released from prison

Shock in Elad: The famous benefactor has passed away

An electric ATV caught fire in an underground car park

Favorable climate ensures the advance of the West Nile virus

‘Ajax has routine, but selection is quantitatively vulnerable’

Rutte does not rule out additional corona measures in sports

Siem de Jong says goodbye to Stam after one year: ‘The...