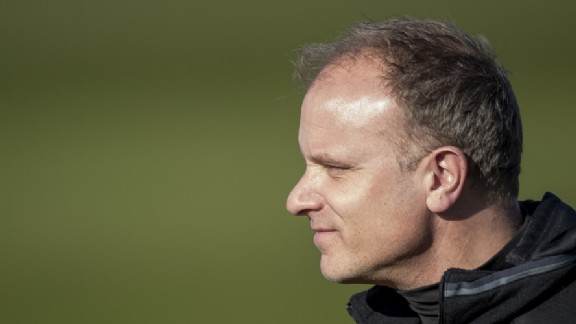 Dennis Bergkamp left Ajax in 2017 and since then the former attacker of Arsenal and Internazionale, among others, has not been active in football anymore. A few years later, the former international of the Dutch national team alludes to a return to the coach world, although he is choosy in his search. Bergkamp does not want to work as a head coach under any circumstances.

“I have not had since my departure from Ajax fulltime and I am currently not actively looking for a job in the football world “, Bergkamp emphasizes in an extensive interview with the BBC. “Nevertheless, it is starting to itch more and more to do something in the football world. Being on the training field is still the best thing there is,” said the ex-attacker, who does not just accept every offer. “I will certainly not be a head coach. That is not my ambition and I also love my freedom too much. I like to spend time with my family and have a life next to football.”

Bergkamp is not necessarily looking for a role as a forward coach: “To be honest, I would find that too limited. If someone does not perform well, I also want to talk about the rest of his game, whether that be something tactical or a personal issue. is “, said the former top striker, who is further developing his ambitions. “What I have in mind is a role that worked for me at Ajax. Between the lines, so to speak. Somewhere in between, what I also did as a player. I was not a real attacker and not a real midfielder. That’s how I see myself as a trainer. I would like to be involved in the first team, but I think my strength lies more in bringing youth players to the A selection. “

In Bergkamp’s view, the gap between the youth academy and the first team is often too big at many clubs. “Sometimes it is like two islands. I could act as a bridge builder. But I wouldn’t want to work, just to have something to do. I like a challenge and to be responsible for moving on players,” said Bergkamp . The former top scorer worked at Ajax as an assistant coach and member of the Technical Heart. After an internal power struggle, he was put on hold by the Amsterdam club at the end of 2017.

*The article has been translated based on the content of Source link by https://www.voetbalzone.nl/doc.asp?uid=377809
. If there is any problem regarding the content, copyright, please leave a report below the article. We will try to process as quickly as possible to protect the rights of the author. Thank you very much!

Red Flames: “Previous duels against Switzerland should not haunt us” | Red Flames

Noble Omar stars in the Cypriot media after an impressive performance

Today at 16:00: Ashdod Dolphins will play in the Champions League for the first time Here in the south

Compliments for Ajax duo: ‘In Eredivisie, now also in the Champions League’

“The Actor We Expected”: The Noble Omar’s Show

“Where Have You Been?”: The Escape of the Dortmund Stars

Perez amazed: ‘wants to know what control over a match is’

Ganz signed seizure orders for Hamas’ money and property, which were...

Soldier van Oranje will not be on stage for at least...

Arrest for assault of bus driver after failure to wear mouth...

Van Gerwen responds to quarrel with Worsley: ‘You have to stay...

“Just a matter of time before he forces his place”