A 2,000-year-old mikveh of 57 tons that was discovered at the leading interchange in the Lower Galilee was lifted today (Tuesday) by a crane and carried on a heavy equipment carrier on its way to a new location to which it was transferred – Kibbutz Hanaton.

The mikveh, which is an important archaeological discovery that testifies to the activity of Jewish agricultural farms in the Galilee during the Second Temple period, was copied near the kibbutz’s active mikveh, because it could not be preserved where it was discovered, due to the construction of a large bridge at one of the interchanges. Anchor by digging deep foundation trenches in the rock where the mikveh was exposed.

The directors of the excavation, ‘Abd Ibrahim and Dr. Walid Atrash of the Israel Antiquities Authority, stated that “the magnificent mikveh uncovered in the excavation is of an ancient type called’ Jerusalem ‘- with a narrow entrance and a wide staircase, plastered with second-century mikvah plaster. The agricultural farm, in which the mikveh is located, existed until it was destroyed in an earthquake in 363 AD. It was restored and rebuilt and continued to exist throughout the Byzantine period, until the sixth century AD. “

According to them, the existence of a purification facility indicates that the farm’s inhabitants were Jews who maintained a traditional and religious way of life, as they used to maintain purity as commanded in the Torah. The local farmers used to dip in the mikveh before producing the local agricultural produce, such as olive oil and wine, to maintain purity. “The discovery changes what we knew about the way of life of Jews during the Beit Shana period. Since Jewish farms in the Galilee were not known until now, it was common to think that Jews in the Roman period did not settle on farms outside villages or cities,” the two added. 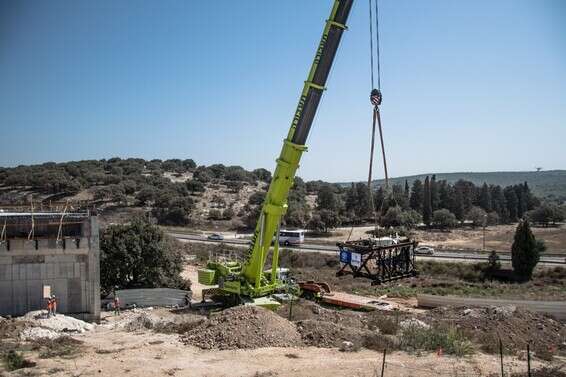 Since it was not possible to preserve the mikveh at the construction site, the idea was raised to detach it from the rock and move it to a protected site for display, for the benefit of the public. The Israel Antiquities Authority, in cooperation with the kibbutz members, joined the operation, which was named “Operation Mikveh”, during which a mass funding campaign was launched in favor of the transfer.

First the mikveh was sawn on all sides. Afterwards, he was cut off from the base and surrounded by a steel cage to keep him and allow him to be lifted and transferred – against the background of the happy voices of the kibbutz residents. “It is so exciting for us to establish a historical and traditional connection with our roots in the Galilee,” said three residents of the kibbutz, who were active in the initiative to copy the mikveh. “To renew the old and sanctify the new. It is a privilege to be part of the process.”

*The article has been translated based on the content of Source link by https://www.israelhayom.co.il/article/805067
. If there is any problem regarding the content, copyright, please leave a report below the article. We will try to process as quickly as possible to protect the rights of the author. Thank you very much!

Where have apartment prices fallen in the shadow of the crisis?

Tried to kill a Jew and failed – his house will...

“Scar” from crash on Imola makes Russell a better driver

‘Anderlecht has a new defense leader’

Wolff: “Should Hamilton stop, the drivers market will run wild”

Who should open the goal of the team against the Czech...