The current absolute Spanish coach, second during the Asturian stage, took the reins of The Red after the resignation, for personal reasons, of his partner. Recently he admitted that he would be second again if he wanted to return.

Robert Moreno reached the national team as the right hand of Luis Enrique, who had already counted on him in his passage through AS Roma, Celta de Vigo and FC Barcelona, ​​having a second stage in the Galician team but in support of Juan Carlos Unzué . After a course in Balaído, I arrive in July 2018 to return to work with the Spaniard. Gijón's was absent in March, when Spain visited Malta (0-2), to do so again in June, where it would defeat Faroe Islands (1-4) and Sweden (3-0), claiming personal reasons. With the passage of time the reason was known, coming to death is Xana daughter, at age nine, because of an osteosarcoma.

Both the technician and his relatives will need some time to recover from the tragic news, but at a press conference he was already asked about the possibility that his partner could return, to which he replied:

"Right now it's a very recent situation that you have to respect and you don't think about it, but if Luis Enrique decides to return one day, I would be happy to step aside and return to work with him. Luis is my friend and that is ahead of any project in life. " 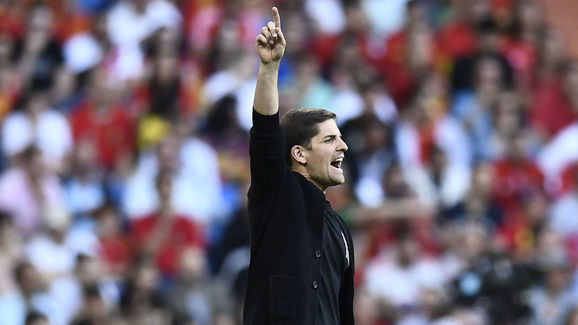 In this way, the coach born in Barcelona makes it clear that he would give up his first job as a technician and assume to be second in the Asturian, something that speaks very well of him and of the esteem he has for his partner.

It is a mystery to know what Gijón will want to do, but the truth is that Robert Moreno has two qualifying matches for the 2020 Eurocup ahead: tonight in Romania and Sunday receiving the Faroe Islands, both commitments at 20: 45h

Inter, another emergency for Conte. Brozovic surprise: he could come back …

BACKGROUND – Gattuso: “Am I the problem?”. The footballers responded like this. Strong accusations …

The championship that puts you on a diet: in England a tournament dedicated to XL players

Basketball Nba: the Clippers beat Dallas, the usual Doncic is not enough for the Mavs

Faithful: “The victory of Napoli has two protagonists. Exult as a fan! Race with Juventus? Here’s how it will end”

Naples and Inter agree, however Politano prefers Rome: a new Petrachi-Ausilio contact will be available shortly

Politano, overtaking Naples. The outside would earn more and for Inter …

Euro 2020, the bursa summoned: Barella is there, D'Ambrosio and Biraghi...

Nethys: "I did not get anywhere, really anywhere," says Muriel Targnion

The United States is busy to emerge a rival to Huawei

An incident in the Bolognese area, an entire family died: two...

Clamoroso De Laurentiis: "Many pieces of m …. if they took...